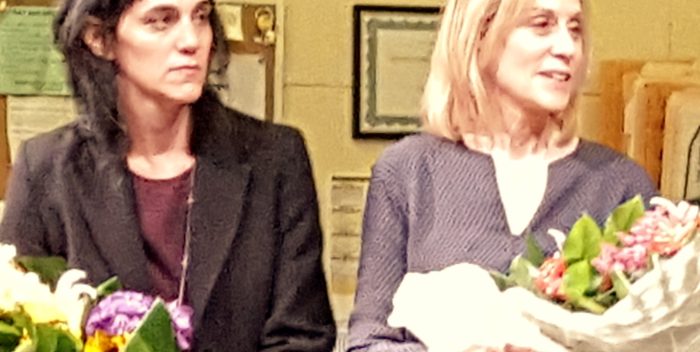 Today, Agnes Nixon died at age 88. She created the soap opera “One Life to Live” and in the mid 70s a desperately flawed character named Karen Wolek. Judith Light played Karen, won a Daytime Emmy, and never looked back. She’s won two Tony Awards recently, and she’s been nominated for an Emmy for “Transparent.” Her career just gets better and better.

So the good news is that Light is making a stunning turn off Broadway in Neil Labute’s “All the Ways to Say I Love You.” It’s a one woman show, a 55 minute monologue, during which Light runs a gamut of emotions that would kill a normal person. But she has become a Great Actress. Her character, Mrs. Johnson, no first name, is a high school teacher married to a “mixed race” man named Eric. They could not have children. They’ve drifted apart. And now Mrs. Johnson has a Secret that so devours her she rakes it over and over in her head.

LaBute’s play is vivid, and helped by the direction of Leigh Silverman, who brings Mrs. Johnson’ story to life memorably. The Secret is that she’s had an affair with a student, had a baby, and passed it off as her husband’s. I asked Judith after the show if she thought that this could be what happened to Karen Wolek–who admitted soap opera style on the witness stand during a murder trial that she was a housewife prostitute.

“No, I don’t think so,” Light said, smiling. (She knows she’s done a very good job here. “We worked very hard,” she told me.) “I think once Karen admitted what she’d done on the stand, she was free.” Mrs. Johnson, however, will never be free. We all went to Sushi Samba after the show, including Light’s “Transparent” co-star Jeffrey Tambor, who brought his daughter. He was blown away. But really, once you’ve seen Judith Light in this play, you need a stiff drink, not a California roll.

Bravo! The play has been extended through October, when Light must return to more lucrative work. Don’t miss her.

PS Agnes Nixon created “One Life to Live” and “All My Children,” wrote for “As the World Turns” and saved NBC’s “Another World” in 1968 when it was almost cancelled. She created very distressed, willful female characters like Karen, like Erica Kane and so on. Her legacy is huge. Judith Light is one of many stars now who can trace their starts to Agnes Nixon. When I interviewed Agnes she was living in the Lombardy Hotel for eons. Someone should make a movie about her life. Rest in peace.