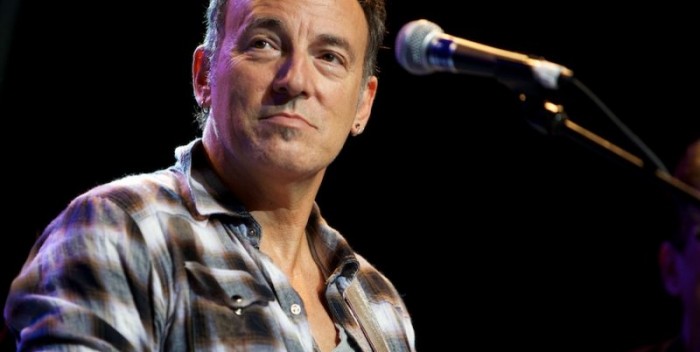 In his memoir “Born to Run,” published today. Bruce Springsteen talks about a lot of his songs. He particularly zeroes in on “Born in the USA,” his monster 1984 hit inspired by Vietnam vet Ron Kovic among others. Springsteen slames the Republican party and Ronald Reagan for “cynically” trying to “co opt” the song.

He writes:  “Records are often auditory Rorschach tests; we hear what we want to hear. For years after the release of my biggest-selling album, come Halloween, I had little kids in red bandanas knocking at my door with their trick-or-treat bags singing, “I was born in the USA.” I guess the same fate awaited Woody Guthrie’s “This Land Is Your Land” around the campfire, but that didn’t make me feel any better. (When Pete Seeger and I sang “This Land Is Your Land” at President Barack Obama’s inauguration, one of Pete’s requests was that we sing all of Woody’s controversial verses. He wanted to reclaim the song’s radical text.)

In 1984, add to this an election year, a Republican Party intent on co-opting a cow’s ass if it has the Stars and Stripes tattooed on it, sitting president Ronald Reagan cynically offering thanks for “the message of hope in songs of . . . New Jersey’s own Bruce Springsteen” on a campaign swing through the state and, well . . . you know the rest.

…I learned a hard lesson about how pop and pop image were perceived, but I still wouldn’t have made either of those records differently. Over the years, I’ve had an opportunity to reinterpret “Born in the USA,” particularly in acoustic versions that could not be misconstrued, but those interpretations always stood in relief against the original and gained some of their new power from the audience’s previous experience with the album version. On the album, “Born in the USA” was in its most powerful presentation. If I’d tried to undercut or change the music, I believe I would’ve had a record that would’ve been more easily understood but not as satisfying.”