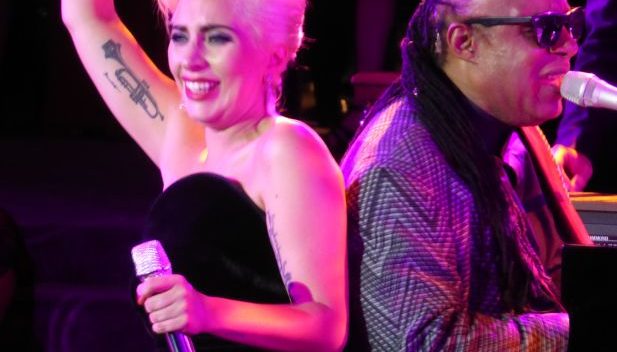 UPDATE SEPTEMBER 26TH: “Perfect Illusion” is now number 40 and falling. What a strange turn of events. A new single should be forthcoming.

Sept 21: What the heck is Lady Gaga up to? The video for new single “Perfect Illusion,” debuted last night during Ryan Murphy’s “Scream Queens” on FOX. It’s a Perfect Confusion. The song, a kind of screed against maybe her former fiancee, already lacked a bridge and coherence. A video with a real narrative line and something witty– as Gaga is known for– might have helped. But the video, which heavily features producer Mark Ronson (famous for producing Amy Winehouse), is a screed unto itself. It’s Gaga rocking out– looking great, of course, and hot– in the desert, on the back of truck, using her microphone like a lasso. But why? What? Huh? The shaky camera is nausea inducing.

The result is that “Perfect Illusion” has made it back to number 38 on iTunes, which is the same as number 100. If you’re not in the top 20 with a new song, it doesn’t really matter. “Perfect Illusion” has not caught on with fans. Yes, it’s scored over 1 million views on You Tube, but again, if I had a nickel for each of those views…

I really hope the “Joanne” album on October 21st has more of a cohesive idea. I feel like Gaga the chanteuse has lost interest in Gaga the rock star, which is fine. At this point, having seen Gaga at Tony Bennett’s two birthday events, I think she should just make amazing pop and jazz albums. She’s an amazing singer. This kind of thing seems like a waste of effort. The new Lady Gaga has bigger fish to fry.