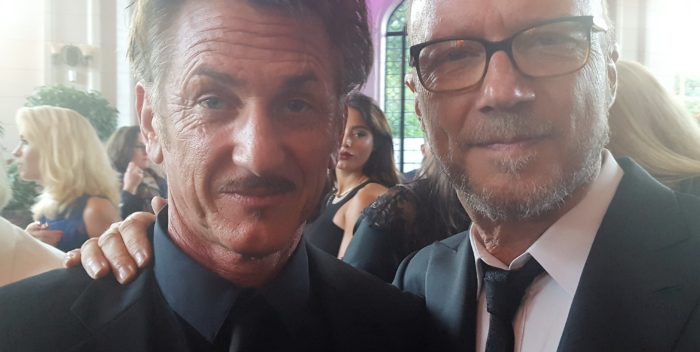 Toronto Sunday night: Sean Penn flew in to be saluted for his work in Haiti by Oscar winner Paul Haggis and his Artists for Peace and Justice. The location was a place called Casa Loma, a medieval castle in the leafy Toronto suburbs. (You know the Canadians operated under feudal law back in 1914 when the Castle was built.)

Anyway, this Castle is truly spectacular, and the views of the Toronto skyline from there are magnificent. This was a black tie event, so APJ pulled off the classiest, most elegant party so far of the festival. Actors Maria Bello and Jeremy Renner were on hand with Haggis, and famed artist Peter Tunney set up a booth where he took Polaroids of the guests, colored them in and signed them. Nelly Furtado performed. A lot of money was raised for Haiti, which is still suffering. If you thought that was over, it’s not.

Meanwhile at the Festival: Danish director Lone Scherfig, who gave us an “An Education,” debuted a wonderful film called “Their Finest.” Based on a novel, “Their Finest” (terrible title) stars the UK’s breakout star Gemma Arterton and the sublime Bill Nighy. They’re making patriotic films for the British government in World War II. Sam Claflin is a total surprise as Arterton’s love interest and Jack Huston is good as ever as her self absorbed artist boyfriend. This might be the most charming movie of the year. Nighy plays his movie star character to the hilt– and he’s a hoot. But Arterton is just a lovely miracle who deserves a huge audience already. I hope this sells to a top distributor and gets a real push. Cheers to producer Jeremy Thomas, one of the greats of the film biz. “Their Finest” is a winner.