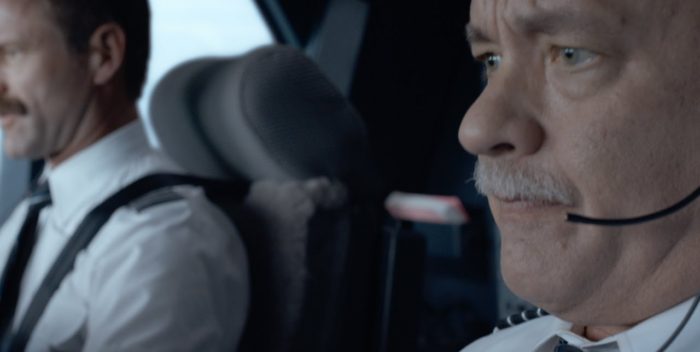 I don’t know why, but I thought a movie about Captain Sullenberger landing his plane on the Hudson would be boring. I mean, we all know the story right? And it was over fast.

Or so we thought. On every level.

Clint Eastwood’s taut 90 minute thriller, “Sully,” is a gem, as turns out. The 86 year old Hollywood icon has gone from a big opera with “American Sniper” to a tone poem with Tom Hanks in the lead. Co-star Aaron Eckhart (as Sullenberger’s copilot) is no slouch, either, and Laura Linney is a stand out as Sullenberger’s wife.

We did not know much about the Sullenberger story. We didn’t know that as the New York press and cabbies, etc considered him a hero for landing a jetliner on the Hudson River– and saving all his passengers and crew– the NTSB was going after him. So Eastwood cuts back and forth between the two pilots doing their jobs and then being questioned about it with skill and ease. Eastwood sees they are American heroes, and that it takes time for us to appreciate that. With a clean script by Todd Komarnicki, Eastwood delivers an American hymn.

What adds to the drama is that Eastwood makes you feel as if you’re inside the US Airways plane, whether it’s the crew or the passengers. Kudos to Blu Murray, his editor, and cinematographer, Tom Stern. Also, the special effects department is unparalleled here. One of the producers told me at last night premiere at Alice Tully Hall and Tavern on the Green that they only finished the film six weeks ago– there was that much detail work. It shows.

Hanks gives such a restrained performance, so elegant and courtly, it’s hard to think he started with “Bosom Buddies.” Each time out, he’s astonishing. But when you think of his characters from movies like “Catch Me If You Can” or “Bridge of Spies” or “Captain Phillips”– he has a trademark of the Good Man, the honest guy who’s going to unabashedly get the job done and not ask for glory or fame. Sullenberger is perfect for Hanks. He’s landed a plane on the Hudson, and he’s surprised to find he’ll be on David Letterman.

So kids, you have something nice to look forward to this Friday. “Sully” makes film great again. It’s a gift. And really, I saw Eastwood last night. He looks great and is already planning another film. He’s on a roll, once again. “Sully” is like the work of a man of 40. Goddam it.