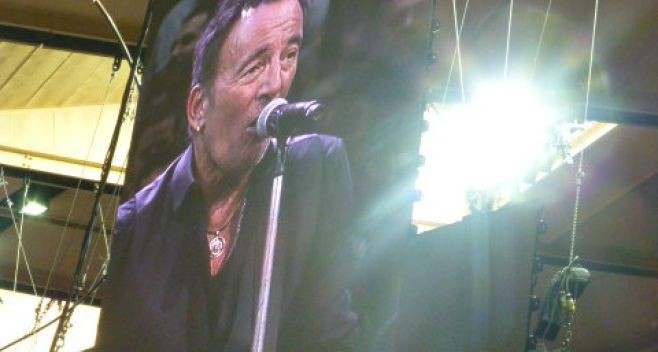 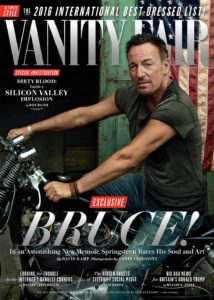 Bruce Springsteen is on the cover of Vanity Fair! Graydon Carter has out-Wennered Rolling Stone. How completely lovely.

Great pictures, of course. The whole thing promotes Springsteen’s memoir, called “Born to Run,” coming September 27th. Bruce says in the piece he has an album of new songs ready for release in 2017. It’s been done since last year.

The record is a solo album, not with the E Street Band. “It’s a solo record, more of a singer-songwriter kind of record,” he says. It’s in the vein of Glen Campbell and Jimmy Webb. Sounds cool, but we’ll miss the band.

That’s not the biggest revelation in the piece.Springsteen and wife Patti also talk about his clinical depression. He really suffers from it, and is medicated for it.

“If I’m being honest, I’m not completely comfortable with that part of the book, but that’s O.K.,” Scialfa says. “That’s Bruce. He approached the book the way he would approach writing a song, and a lot of times, you solve something that you’re trying to figure out through the process of writing—you bring something home to yourself. So in that regard, I think it’s great for him to write about depression. A lot of his work comes from him trying to overcome that part of himself.”

Wow– this book is going to be very introspective, a little dark, and very Springsteen. Nothing held back.