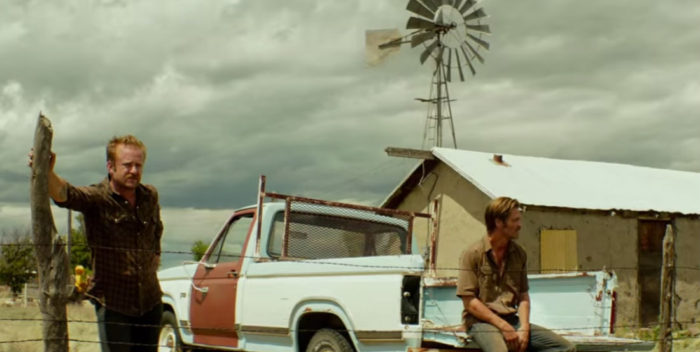 The best reviewed film of the year, certified 99% on Rotten Tomatoes, is CBS Film’s brilliant “Hell or High Water.”The sleeper hit will cross $12 million this weekend and start earning money, a rarity among original non-comic book movies or sequels.

“Hell or High Water” stars Chris Pine and Ben Foster as a pair of bank robbing brothers with a purpose, to rob branches of the Texas Midland bank which has threatened to foreclose on their family ranch. Luck was on their side until Texas Ranger Marcus, (the sublime Jeff Bridges) makes it his mission to catch them as his last crowning achievement before his soon-to-be retirement.

Directed by Scotland native David Mackenzie and written by Taylor Sheridan, (who also wrote “Sicario”) this film had me from the first scene. I loved it because it’s a true artistic hybrid; a cerebral bank heist combined with “Bonnie and Clyde” and Westerns of lore. The complicated camaraderie and the love between the troubled brothers along with the action-thriller elements, has made this my favorite film of the year so far. Look for nominations all around for the mega talented threesome, as well as shout outs to Gil Birmingham as Marcus’s long suffering half Comanche partner Alberto Parker and Katy Mixon (who played Melissa McCarthy’s quippy sister on the just ended “Mike And Molly” sitcom) as the loyal, sassy waitress.

I spoke with David Mackenzie and Chris Pine at the recent LA premiere at the Arclight in Hollywood. I asked David how a Scottish director, (he still lives there) got such a magnificent hold on this singularly American story. He answered, “I did research, spent time there a few years before. It happened quickly. The way I like to work is very intuitively and being sensitive to the needs of the film.”

Pine — aka Capt. Kirk this summer– gave his take. “This film is in a unique American voice, like a Paddy Chayesky, or a Jeff Nichols or the Spanish Director Pedro Almodovar. Ironically this is by this brilliant Scottish director who has a mainline into the zeitgeist of what’s happening in America right now.”

What’s the difference, I wondered, between this film and “Star Trek”? Pine said: “It’s all make believe, this just happens to be on a smaller scale and allows for a bit more moments of quiet. I love doing both and this was a way a character that I often don’t get a chance to do.” What’s up next for him? “Next is Wonder Woman.”  (Pine plays her loyal consort, Steve Trevor.) “Then after that I’m craving to sitting in the sun and doing nothing.”