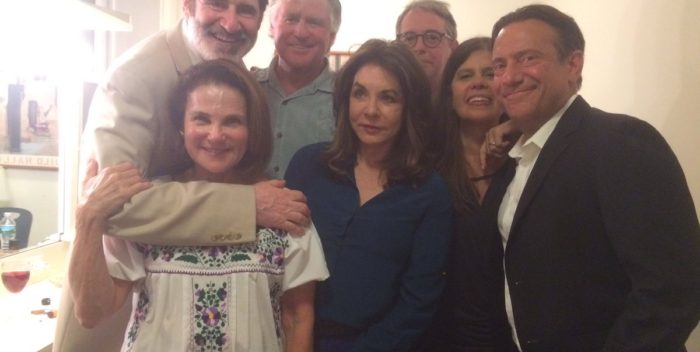 THE HAMPTONS— Barbra Streisand is here. Coming off her hit tour and now having a hit album, Streisand has made her annual journey to the home of BFF Donna Karan. At last night’s all star staged reading of Eugene Pack’s “The Poets of Amityville,” the talk was: Where is Barbra? Has she been at the Clinton fundraisers? Will she come to tonight’s event at Guild Hall, a panel discussion of the Obama legacy moderated by Katie Couric?

“Poets” at Guild Hall boasted a true all star cast with Matthew Broderick, Treat Williams, Stockard Channing, Tovah Feldshuh, Carol Kane, Richard Kind, Dayle Reyfel, and others. Lorraine Bracco introduced the evening and its charity, the Felix Organization, which enriches the lives of children growing up in the foster care system. (Michelle Olivia Seaman cast the “Poets of Amityville” reading, with historic result, even on a night when the buzz was all for politics.)

One of many great moments in Pack’s hilarious play, is a duet of Hall & Oates’s “Maneater” performed by Matthew Broderick and Treat Williams. The actors are students in a poetry class competing for a prize of attending a writing retreat in a castle in Dublin, but the music is what they do in their off time. You’ve gotta love Matthew for his high notes, and Treat for his groovy
moves.

Pack’s unique talent is dialogue including iffy poetry individuating these would be Plaths, and casting. He’s the man behind Celebrity Autobiography, a mashup that this year included works by Ivana, Ivanka, and Donald Trump, performed by la crème de la crème of performers in the Hamptons, with Susan Lucci and Christie Brinkley.

But it was all politics, Hillary, and Barbra for the night. At least that was the talk at a post-play reception in Guild Hall’s garden with refreshments from Swedish Culinary Summer. Dick Cavett, Bob Balaban and Lynn Grossman were among the well-wishers.

Patti Kenner was sporting a Hillary campaign button, a replacement, she said. Kenner went back stage last week to speak to Streisand after her concert at the Barclay Center: “She admired my Hillary pin, and so I gave it to her.” Before the play, she’d spent the afternoon in Sag Harbor at a Hillary fundraiser, a carnival for children at a fancy estate: “No body ever talks about the family side of Hillary.”