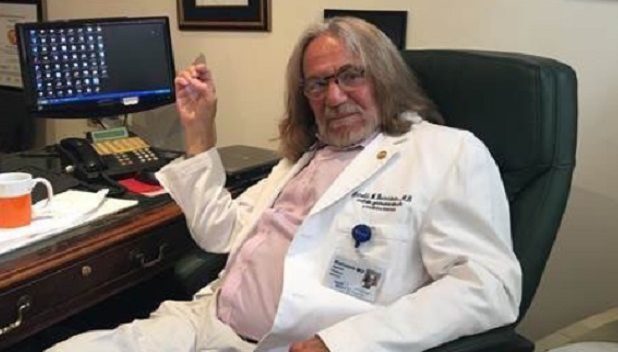 EXCLUSIVE I had read some time ago that Donald Trump’s doctor’s note came from Dr. Harold Bornstein on the Upper East Side. Also, that the note Trump submitted came on a prescription pad I recognized, with both the names of Harold Bornstein and his physician father, Jacob. I think I blocked this out.

Of course, this seemed odd. The Bornsteins were my doctors from around 1979 to maybe 1990, maybe a little longer. Jacob Bornstein has been dead since 2010, so his letterhead didn’t mean much.

How did I meet the Bornsteins? Their cousin, Abram London, had been my doctor briefly in Boston in 1978, when I was in college. I went to Dr. London through a friend, for stomach trouble. About a month after Dr. London treated me, he wound up on the front page of the Boston Globe. He and and another doctor had been arrested for Medicare fraud. They pleaded guilty. Dr. London, then 42, apparently kept his business. He’s still practicing medicine at age 80. Go figure.

Dr. London’s cousin, Jacob Bornstein, probably kept going until the end, too. He was 93 when he passed away. Little by little, though, in the mid 80s, his son, Harold, took over the practice. He always looked the way he does in the NBC photograph I’ve attached– like a stoned hippie. Was he stoned when he was examining me? I hope not. But the long hair, the very full beard and mustache, the bloodshot eyes– they were his trademarks.

The Bornsteins never mentioned back in the 80s that Donald Trump was their patient. That seems odd in retrospect, because there wasn’t much secrecy about who their patients were. I do remember vaguely that they had a couple of other media types, who they bragged about. Also, in 1989, Donald Trump was on the cover of the magazine I edited and helped found, called Fame. Harold knew I’d met Trump, had edited the article by Jeremy Gerard, etc. He may actually have come to one of the parties that launched Fame. (We had a lot of parties.)

Anyway, the Bornsteins were not the sort of doctors who attracted a glitzy crowd. Their cramped offices were always filled with not very glamorous people. There were a lot of very old people, and the waiting room was always crowded. Appointments were usually an hour off schedule. My grandmother once went there to see Jacob Bornstein, but she wouldn’t go back. “His offices are dirty,” she said. A good friend of mine said the same thing. It would be hard to imagine a Trump pulling up to their door in a limo. Ivana? Never.

It was not hard to get medication over the phone from Harold. That was certainly appealing when I was in my 20s and too busy to come up for a breath. Harold diagnosed colds and the flu over the phone, and prescriptions were called in to the pharmacy. One time, in 1986, when I was jammed with work as a book publicist, carting around the likes of Paloma Picasso and Peter Ustinov in the same week, I got really sick. Harold gave me a steroid shot in the tush. I was up and running again in minutes. To me, then, that was the definition of a good doctor. After all, I had to take Zbigniew Brzezinski (Mika’s dad) to “Live at Five.”

I watched the NBC report tonight with great amusement. So did my brother, who was also briefly Harold’s patient. Harold still has the Cheshire smile, and acts like Uncle Duke from “Doonesbury.” He certainly stood out back then as “different,” and nothing has changed. From the video of his office, it looks like nothing else has, either. Has he really been Donald Trump’s doctor for 39 years? He says so, so I have to believe him. Does he really believe that Trump would be the “healthiest individual ever elected to the presidency”? (More than William Henry Harrison, who served one month before dropping dead from typhoid fever, certainly.)

Wait: Could Harold Bornstein become the White House physician? Am I dreaming?

Please, wake me when this is over.