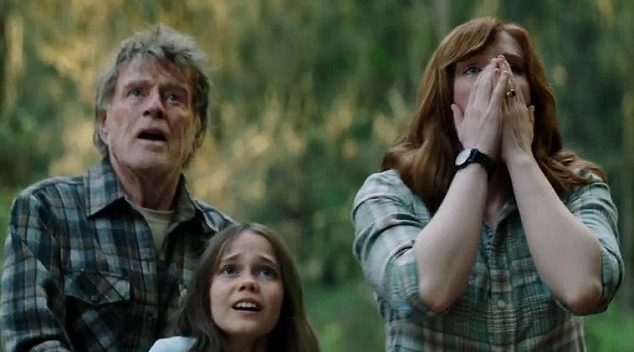 Robert Redford has an Academy Award for directing the great film, “Ordinary People.”

But his many acting performances have not yielded him a gold statue yet. He came very close with “All Is Lost,” which was wrecked by its distributor. And last year, in “Trust,” as Dan Rather, he gave a tremendous performance.

Now, in the Disney remake of “Pete’s Dragon,” Redford could be up for Best Supporting Actor. And wouldn’t that be something if Warren Beatty and Robert DeNiro are also in the group? Yikes! That could be a movie in itself!

Loosely based on the 1977 film, the movie opens with the classic Disney calamity, a car crash that kills 4-year-old Pete’s doting parents which then strands him in the foreboding forest. Along comes a green furry dragon, whom Pete names Elliot from his beloved book he carries that survived the crash along with him. Loyal Elliot takes the boy under his wing, literally, and proceeds to protect and care for him for the next six years.

The now wild Pete, played beautifully by Oakes Fegley, is discovered by the sweetest Park Ranger ever, Grace, played with luminous kindness by the gifted Bryce Dallas Howard. Complications arise when her fiancée, their town Millhaven’s saw mill-owning Jack (Wes Bentley,) becomes intent on chopping down swathes of the rich forest. Combine that with Jack’s redneck brother, Karl Urban, who has his sights on capturing beloved Elliot, and compelling drama ensues.

Robert Redford gives one of his most appealing performances of his career as Grace’s introspective, reflective and loving father Meachum, who has his own precious history with Pete. The visuals are lush and welcoming, Weta Digital’s Eric Saindon and Mike Cozens spectacularly created the totally lovable Elliot, and many of the real life shots were shot in New Zealand where Weta is based. Combine all of the above for an old fashioned feel and a sincerely moving and powerful final act. This fantasy adventure captures all of the best of Disney’s irresistible magic and is an experience no one should miss.