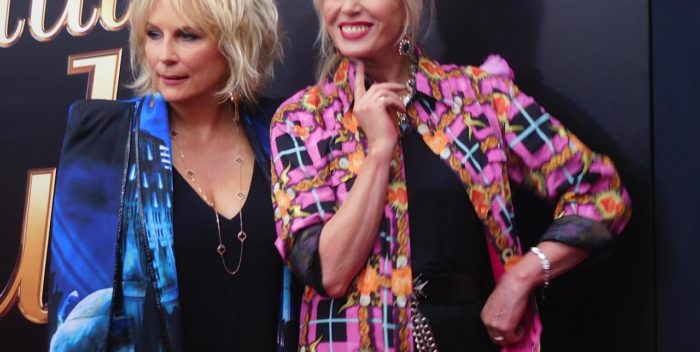 Older but not wiser, those outrageous aging Brit party girls, Patsy Stone and Edina Monsoon are back in “Absolutely Fabulous: The Movie.” So break out the Bolly (champagne) and Stoli (vodka) sweetie darling!

Eddy and Patsy, played by writer-creator Jennifer Saunders and actress Joanna Lumley respectively, attended the New York premiere Monday night at the SVA Theater on West 23d Street. The Fox Searchlight big-screen adaptation of the popular television show, which ran from 1992 to 1996 and again in 2005 and 2012, will open Friday and is already a hit in England.

Lumley arrived in character as Patsy, in 1960’s make up and wearing her signature early Ivana Trump bouffant French twist. She hammed it up on the red carpet in a pink and black duster coat with an applique of the Virgin Mary on the back. Saunders was dressed more demurely in black slacks and a satin blue jacket featuring the New York City skyline.

It seemed like every drag queen in Manhattan was at the premiere. The guest list also included Chris Colfer from the film, Frankie Grande, rock legend Jeff Beck and the Tony-winning star of “The Color Purple” Cynthia Erivo.

On the red carpet, Lady Bunny, who wore her usual towering wig and very short mini, told me of the Ab Fab film, “We need to laugh because this has been a contentious election. There’s blood and death and explosions and shooting everywhere. We’re a mess,” he said. “Honey we need escapism and we need silliness and it is the summer.”

Meanwhile Saunders told journalists on the red carpet that Kate Moss and Stella McCartney, who are featured in the movie, are good actors and good friends and were good sports and easy to work with.

Lumley seemed to have a good time on the red carpet signing autographs and posing for photographs with the drag queens.

I asked Lumley how Patsy evolved since the show began and of course she gave me a blank look. “What darling?” Patsy hasn’t changed at all. She’s still popping pills, stumbling around drunk and desperately trying to pretend she’s still young. “She was pretty much fully formed from the word go,” she told me, adding, “I’m not like Patsy at all. She’s mine but I’m not her.”

Lumley told me she’d also be eager for another film. “I’m ready if Jennifer writes it.”

“I just want your legs,” Saunders told Lady Bunny as she took the stage with Lumley. “My vagina’s my own by the way,” she told the hooting crowd.

She thanked the audience for coming and added, “This is just the most exciting night for us The London premiere was big but New York  just feels so glamorous and show businessy.”

As for the film, it’s funny but not as witty or hilarious as the television show. Some zingers land but some jokes don’t. The best lines Saunders has generously given to Patsy, who is more outrageous than ever. The slapstick scenes are the best. Patsy stumbles around drunk more than ever and gives herself Botox injections first thing in the morning as casually as most people brush their teeth.

The plot revolves around the fashion industry where Patsy is a fashion director of sorts and Eddy is a publicist constantly on the prowl for clients. There are lots of big-name fashion cameos, almost as many as in he ill-fated “Zoolander 2,” but fortunately it works a lot better in “Ab Fab.” Both movies show fashionistas are Kryptonite to comedy.

The plot, flimsy as it is, revolves around the presumed death of Kate Moss, who by the way is so wooden and languid she barely registers as having a pulse.

The action begins when Edina hears through Patsy that Kate Moss has fired her publicist. Edina, desperately in need of clients – she now only has Lulu and Emma Bunton and they both want to dump her – is determined to be Moss’s new pr. She rushes over to introduce herself to Moss at a big glossy fashion party – at which Moss is chatting with Jon Hamm, who plays himself – and accidentally knocks the model off a ledge where’s she’s perched into the Thames River. When Moss doesn’t resurface everyone assumes she’s dead, which is covered by the media as if it were an international tragedy.

Hounded by the news media camped outside her door and now hated by the entire nation, Patsy, who face jail time, goes on the lam to Southern France with Patsy. (Sadly you can’t look at the gorgeous views of Nice and Cannes without thinking of the recent tragedy.)

In desperate need of cash, Patsy hunts down a former very rich lover who proposed marriage four decades earlier. When her plans to marry him don’t pan out – he’s with much younger gold diggers now – she masquerades as a man and begins to woo the richest woman in the world, who’s about a hundred and nearly blind. By the way, Lumley looks great in a man’s suit and resembles David Bowie. The ending has been cribbed from “Some Like It Hot,” but who’s complaining? As sheer escapism and silliness as Lady Bunny said, it fits the bill.

The after party was at the typically fashionable Gramercy Hotel. In a scene that could have been lifted out of an “Ab Fab” episode, a hefty publicist guarded the door to the VIP area where Lumley and Saunders mingled with a small number of guests who seemed to be producers. Meanwhile the rest of the party guests wandered around outside their area as servers passed out lamb chops and poured from bottles of Bollinger.