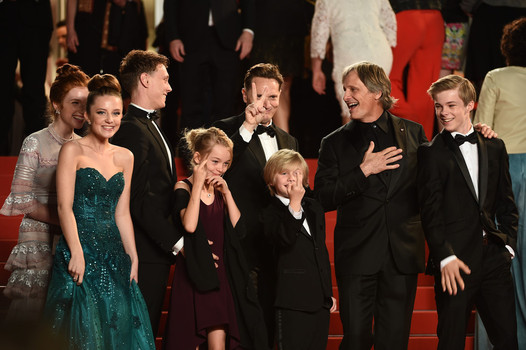 Viggo Mortensen lets it all hang out, literally, in the pretty great “Captain Fantastic,” opening wide today around the country. Matt Ross’s tale of a family living off the grid coming to terms with modern America is one of the best of the year, and a must- see for adults who want to be in a theater and see real super heroes.

Mortensen’s Ben — truly loving Dad whose raising his six kids in relative isolation in the Pacific Northwest when their lives are struck by tragedy– is a real super hero with no cape (and no clothes at one point).

At a private screening last week in Hollywood, I asked one of the producers how Mortensen (who really shies away from press) handled the scene in question. “Viggo was so immersed in the role and didn’t balk at all. He’s a character actor. He gets it,” said Shivani Rawat.

The director of “Captain Fantastic” is Matt Ross, whom audiences will recognize from HBO shows “Big Love” and “Silicon Valley.” He’s a multi tasker. How does he handle reviews, I wondered? Ross said, “After Sundance I stopped reading reviews because when they are positive I’m happy but when they’re negative I’m devastated. I can’t self evaluate the reactions of others. When people don’t like it I’m sad, but when people do like it I feel their energy. So I just tune it out. I want everyone to have their own experience. We don’t all love everything.” He then added cheekily, “but only talk to me if you love it. “

What’s so artistically wonderful about this film is that Ross strikes the right unsettling chord. From scene to scene you’re never sure if Ben is the best Dad in the universe, or conversely the most irresponsible. Ross’s singular vision of the family works on many emotional levels, especially Ben and the children learning how imperfect they and life are in their seemingly perfect bubble world.

Besides Viggo’s typical intense, funny and go-for-broke character work he does in each and every film he’s in, the added bonus of a naked hunky Viggo in a laugh out loud wacky scene. The kids are standouts, especially George MacKay and Sami Isler. Frank Langella, Kathryn Hahn, Steve Zahn and Ann Dowd are all equally terrific.