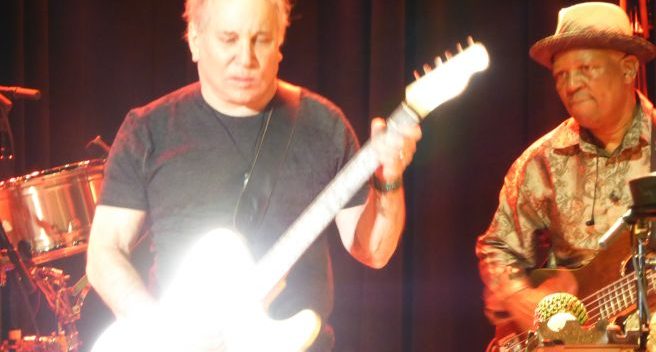 Paul Simon, a 75 year old man who came from Forest Hills, New York, returned there last night after 50 years. He took the stage at Forest Hills Stadium with his versatile band (including the amazing Mark Stewart) and played a two and a half hour show that musicians half his age would give their whole Twitter followings for.

But returning to Forest Hills, the neighborhood from which he and Art Garfunkel launched to stardom with “The Sound of Silence” in 1966, didn’t make Simon nostalgic. He didn’t bring Garfunkel or refer to him, and he didn’t sing “The Sound of Silence”– even though it’s been the last song at almost all of the shows he’s done this spring to promote his excellent new album “Stranger to Stranger.”

Simon is not about nostalgia or looking back. This is clearly important to him. And even though he told the New York Times this week that he’s done with show business, he also clearly is not. He’s happy as a clam up there, and the good vibe radiates right across the open air venue. For a small physicality, Simon projects large on stage. He captains a big band of crack multi-tasking musicians including several who go back 25 years to the innovative “Graceland” period of his career.

After opening with “The Boy in the Bubble,” from that era, Simon did stop for a minute and say, “I can’t tell if this is strange or a dream,” or something to that effect, about his return to Forest Hills. And then he pushed on. It’s a 28 song show, with just a few nods to Simon & Garfunkel– “Homeward Bound” reworked in neo-Simon post “Graceland” style was magnificent. A bit of “El Condor Pasa” was used to introduce “Duncan,” a song from Simon’s first solo album that has lately been revived and given new prominence. “The Boxer” was the only song that suffered; thrown in at the end, it felt rushed and lacked its usual power.

Still, the show was all about “Stranger to Stranger,” a big hit for Simon after two previous albums– the top notch “Surprise” and “You’re the One”– were poorly marketed. He played three songs from the new one– the title track, “Werewolf,” and “Wristband,” and could easily have done more. A large part of the show (about 8 songs) is dedicated to “Graceland” and its followup, “Rhythm of the Saints,” including “You Can Call Me Al” and “That Was Your Mother,” which mix African and New Orleans sounds joyously. There was also a rockin’ cover of “That’s Alright” — convincingly Presley-ish– dedicated to the recently passed Scotty Moore.
You know, Simon sings in “Still Crazy After All these Years” the line I’m not the kind of guy who likes to socialize, which may be true. But on stage he is an expansive socializer. He is more expressive than ever, and his voice has taken on a scotch and soda melodic quality that may lack Garfunkel’s sweetness but remains its own notable achievement.

He closed last night’s show with “American Tune,” a song written right in the middle of the Vietnam-Watergate malaise that’s every bit the profound anthem of “Sound of Silence” or “Bridge Over Troubled Water.” The song’s themes resonate even more than they did in 1973– rising above despair and abuse–and it’s certainly shocking that it still means as much if not more than it did then.

PS If you go to Forest Hills Stadium tonight, do check out the Kiosk near Section 4 where a sensationally talented artist, Bill Sullivan, is selling gorgeous posters for this season’s shows. Sullivan is an actual artist, the real thing, and his posters– I can’t even call them that, they’re artworks– are a steal for $40.