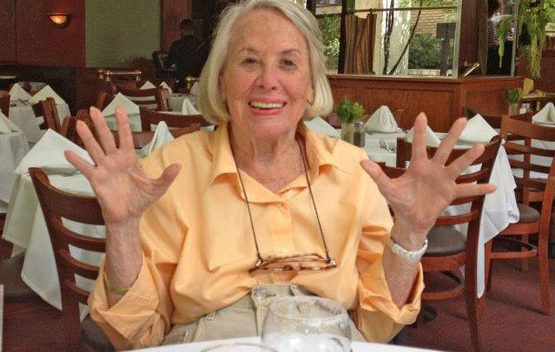 Liz Smith is taking a vacation. Doesn’t she deserve it? The all time legend of gossip is 93 years young. Liz is taking a break from her daily column written with Denis Ferrara– which appears on New York Social Diary-– until July 18th. They’re moving out of their gossip HQ on East 38th St. after 40 years, too. I hear Liz has new digs uptown.

Liz writes today that she’ll miss dining in her favorite spot, El Rio Grande. This is a Tex Mex place in the base of her building, with Texas and Mexico sides to it. Liz sits on the Texas side, of course!

She writes: “This means, among other things, saying a farewell — at least on a daily basis — to the wonderful El Rio Grande restaurant that occupies the ground floor of this building. No more of those delectable fresh tostadas, or those gasoline-fueled Margaritas. (If I were younger I might say that the latter deprivation is a good thing, but … I am NOT younger and one only lives once, or so I am told. If this is not true, I’ll be sure to come back as — a Margarita!)”

Liz’s column appeared in the New York Daily News and the New York Post at different times starting in the mid 1970s. She made a big splash in the 90s when she went to New York Newsday and the LA Times Syndicate. This was before the internet and before gossip was simply made up or re-purposed out of thin air. Liz didn’t write it if it wasn’t exactly right. Her scoops were real stories– not supposition. She wielded her power — which was awesome– with grace and wit, and the best sense of humor. She still does.

Liz, Denis and Mary Jo McDonough will be back on July 18th, refreshed and ready for a new season. I just hope they use a lot of SPF!

PS You can still wrangle a copy of Liz’s wonderful memoir, “Natural Blonde,” from Amazon. What beach book. You can’t put it down!