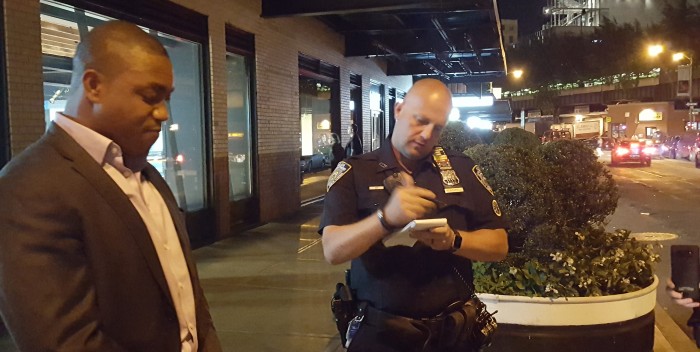 You hear about it. You read about it. But you don’t always get to see it. Last night (Wednesday, June 22) I got to witness what it’s like when an NYPD officer humiliates, embarrasses, and I would say profiles a young black professional for no reason. It wasn’t pretty.

Time: a little after 11pm. Coming out of Du Jour magazine’s premiere party at the Top of the Standard on Gansevoort Street for the TV series “Power.” My friends I notice a scene coming together on the east side of the street. Two uniformed undercover cops have jumped out of a Crown Victoria yellow cab and are berating a young black man, maybe early 30s, dressed in a nice suit. He’s got a pretty young white woman with him. They have also come from the party.

What’s going on? The married couple– Nathan Francis, who has his own financial firm, and Caitlin McDonough, who works for the Plaza Hotel Sahara Group– were trying to get a cab. As McDonough told me later, they were split between calling Uber and hailing a cab. The taxi Francis wanted was blocked by another, and Francis waved that one away on the busy two-way block. McDonough says he yelled to the cab to “chill out” as they debated calling an Uber. He was standing in the street like most New Yorkers in the same situation.

The cops– whom Francis did not realize were undercover in the cab– jumped out. And that’s when the trouble started. Instead of comprehending everyone had made a mistake, the cops threaten to issue Francis a summons. For what exactly, we wanted to know?

McDonough told me later that the lead officer, named Mencarelli, badge 1113, told Francis he’d be cited for at least six things including public intoxication (like us, they’d each had a glass of Champagne at the party), being a public nuisance. and harassing his own wife. There was some talk of “jaywalking” (which to a New Yorker is the funniest word in the English language). McDonough said the cops told Francis, “Something could happen,” implying something serious. All this for trying to hail a cab. While being black.

This was the point where our group intervened, informing Officer Mencarelli and his partner that Francis had done nothing wrong, and that they ought to re-think their approach. This seemed like racism to me, and I said so. (I also told Mencarelli that I was a journalist and knew Commissioner Bratton– haha, all of this meant zip.) What it really seemed like was an unnecessary effort to humiliate or embarrass the only black professional on the block in front of his friends, colleagues, and wife.

Nothing we said to Mencarelli registered. Instead he drew Francis away from us to speak to him without witnesses. “He told Nathan he’d be investigated for 12 months,” McDonough told me on the phone later. “I know he didn’t issue him a summons in the end because you guys were there. His partner was freaking out.”

Mencarelli’s partner filmed the proceedings on a smart phone. I hope the NYPD takes a look at it this morning.

Francis is a native of Westchester County and a graduate of the University of Arizona. Not that that matters. He’s a law abiding American citizen. And he was treated shamefully by an officer of the NYPD last night, with plenty of people watching. The cop simply didn’t care.

They owe the Francises an apology. A public one.