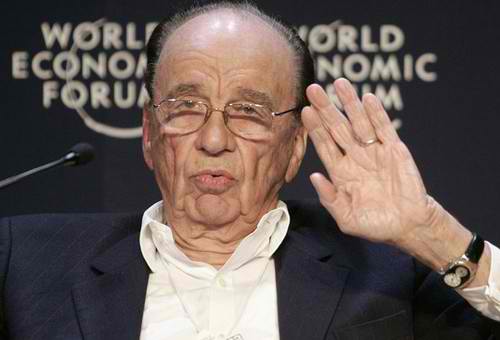 Rupert Murdoch is missing. That is, missing from public life, opinions, politics. And his newspapers are playing games in London. The Times says Britain should remain in the European Union. The Sun says they should leave.

Should I stay or should I go? And Murdoch? Who knows?

He was married to Mick Jagger’s ex, Jerry Hall, on March 4th. On that day the incredibly opinionated publisher and owner of News Corp, sent out the last of four Tweets that had begun on March 2nd. 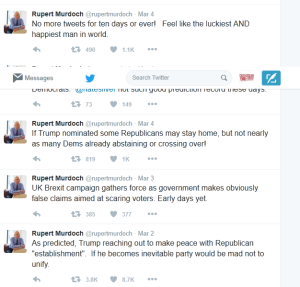 But right after that Nate Silver tweet, Murdoch sent out one more: “No more tweets for ten days or ever! Feel like the luckiest AND happiest man in world.”

And that was it. Only one more Tweet has appeared, on May 16. Mysteriously all it says is: “@TheSun.” Nothing else. Was it something unfinished? Did Murdoch have something to say? Did someone stop him or did he forget what he was doing?

Since the wedding, Murdoch has been photographed very little. He and Hall were seen at a flower show on May 23rd. On June 8 they were snapped in England’s Lake District at a relish shop. Yes, a shop that sells relish. Condiments.

Everyone would relish Murdoch sending out a signal that he’s alive, not doddering, is in control of something, or anything.

Or is it possible the happy faces of his adult children at the Hall wedding ceremony indicate the best deal they ever made?

Until the rushed Hall romance you’d have thought Murdoch’s favorite Rolling Stones song was “Wild Horses– couldn’t drag me away.” And now? More like “it seems we’re slipping away.”