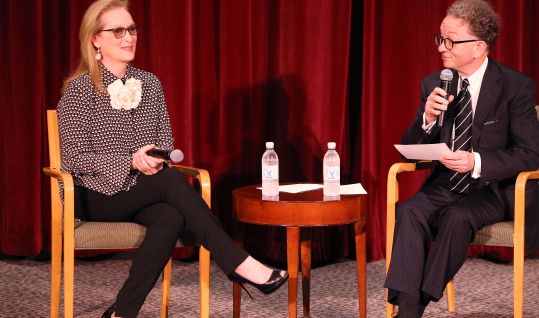 “FFJ” is the true story of a New York socialite in the late 1930s who had so much money she paid the people around her to turn her into a coloratura opera singer. The problem was, she was a painfully bad singer. Still, she persisted until she actually performed at Carnegie Hall in an evening still so legendary that Carnegie Hall lists it as their most reprinted program.

Streep plays Florence, who’s like a horror fashion show (including a wig). Hugh Grant makes a huge comeback as Florence’s loving but philandering husband, and Simon Helberg (of Big Bang Theory fame) is her piano accompanist (and he really plays the piano in the movie). The essential Nina Arianda has a welcome and extended cameo as a floozy who’s comic relief– even though there’s plenty of humor already.

“FFJ” doesn’t open until August 12th but let me tell you now that Streep will be in the running for awards, as will Grant and maybe Helberg. Meryl takes a person who is basically a caricature and turns her into a heroine, quite remarkably. Jenkins wasn’t particularly self aware, but Streep fixes that so that you can see into her soul. I always say, Watch what Streep is doing. She’s performing a sleight of hand, card trick, magic act and you don’t know it until it’s over. She’s remarkable.

Tony winning costume designer William Ivey Long– who’s also the head of the American Theater Wing– did a little Q&A on stage after the screening at the Directors Guild Theater. This was amazing since Long, like a lot of us, was up until around 3am with the Tony Awards. Streep and Long met at Yale Drama School in 1972, so they had an easy rapport.

We learned that Streep majored in costume design herself and thought that was where she was headed. “That’s why costume designers hate me,” she said, “because I have so many ideas.” She also revealed she based Florence on her own grandmother, whose bosom, she said, was “like a breakfront.”

At the dinner following upstairs at Carnegie Hall’s Weill Room, Streep — 3 Oscars, thousands of accolades, etc– worked the room. Unlike most stars of films who sit sequestered all night at their table, Meryl went around and shook everyone’s hand, talked with all the guests. She was just about last to leave, also. She’s a mensch. What a pleasure!