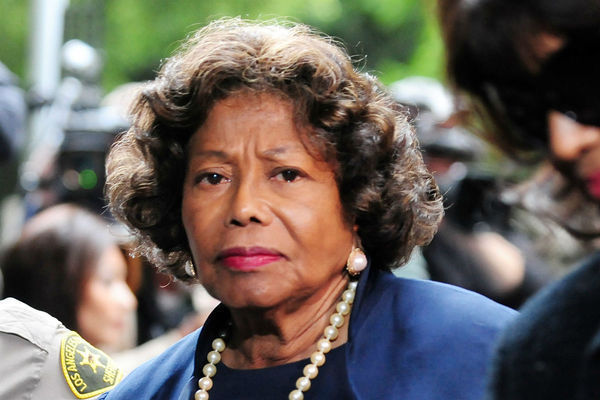 6:22PM EXCLUSIVE UPDATE the Jackson family lawyer Perry O. Sanders, who wanted to tell me he’s been in touch with Trent Jackson, and is working on “getting to the bottom” of this story. “No one will take advantage of Mrs. Jackson.” And — this is from me– while Trent Jackson may have rubbed some people the wrong way, we are in no way suggesting that he filed these papers. More to come…

Someone is trying to sam Katherine Jackson.

Papers were recently discovered with her “signature” in which Michael Jackson’s mother was seen signing away the rights to her old home in Encino, California. Mrs. Jackson hasn’t lived there for years, but the house– a walled compound– still exists on Hayvenhurst Avenue.

Unfortunately, whoever tried to sign away the house from Mrs. Jackson didn’t realize something important: she doesn’t own it. The property has been owned by Michael Jackson’s estate since he died. Michael himself owned it before that for years. You may recall he almost lost it in foreclosure back in 2005.

Someone– no one knows who but there is speculation– got Mrs. Jackson’s signature, had it notarized and stuck onto a Quit Claim notice. 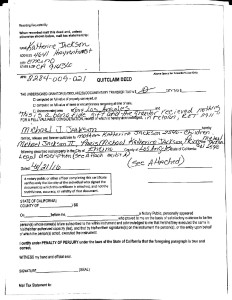 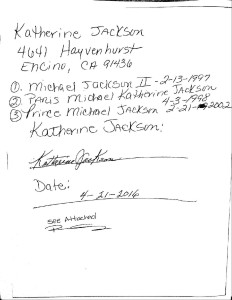 Mrs. Jackson has lived with her grandchildren– Prince, Paris, and Blanket– in a house now owned by Michael’s estate in Calabasas, California. The only other person who’s around her all the time is Joe Jackson’s nephew, Trent Jackson, who acts as her daily aide and supervisor.

Trent was very helpful four years ago when Mrs. Jackson was spirited away by several of her children in what looked a little shady. But Mrs. Jackson returned to her home, and life went on. Since then, Trent, my source says, has become very proprietary in relation to his aunt by marriage. “He’s very unpopular in the family,” a source says. “If you want to speak to or see Katherine, you have to go through Trent.”

You might think this is a strange story if you’re just joining our program in progress. But really, it’s just another bump in the long road that is the Jackson Family Highway to Hell.