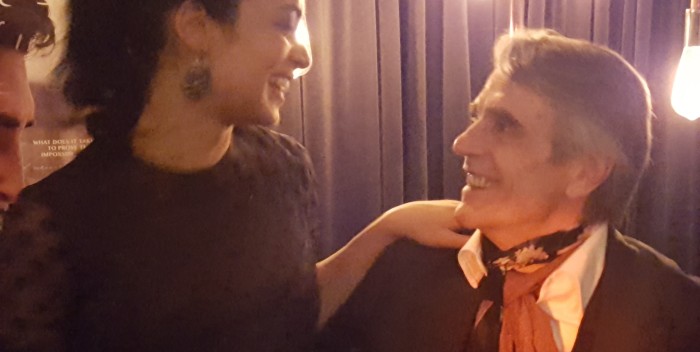 Lots of talk and buzz last night at the premiere of Matt Brown’s “The Man Who Knew Infinity” starring Jeremy Irons and Dev Patel. The Merchant-Ivory-like story of India’s premiere mathematician opens tomorrow with gorgeous Devika Bhise (graduate of Manhattans’ tony Brearley School and Johns Hopkins, no less) featured prominently. I almost forget I had the pleasure of sitting next to Devika in January at Lynn Hirschberg’s W Magazine “It Girl” lunch in Hollywood. Now she’s a movie star!

Dev Patel, still just 26, has never stopped working after his memorable debut in “Slumdog Millionaire” at age 17. Between “Exotic Hotel” movies and “The Newsroom,” Patel is on a fast track. He plays Srinivasa Ramanujan Iyengar who went from poverty in India to becoming a Royal fellow at Cambridge University in England during World War I. He died at age 32. Ramanujan is revered in India, director Mira Nair told me last night. “He’s probably second to Gandhi in being a legend.”

The famous producer Ed Pressman, wife Annie and son Sam produced “Infinity” and their next project, fingers crossed, is “American Psycho” director Mary Harron’s take on “Salvador Dali.” Antonio Banderas may play Dali, which sounds like a great idea. (Mark Rylance’s name has been mentioned, too. He’s become an overnight Meryl Streep, but he’s not right for everything.) The Pressmans, by the way, assembled an all star crew to make “Infinity”– you won’t see another movie this sumptuous looking this year.