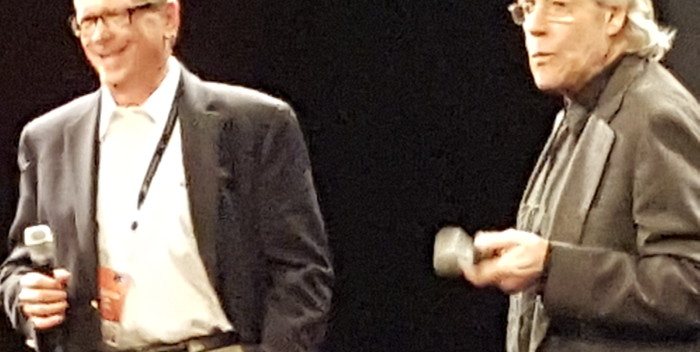 Former USA Today film critic Marshall Fine has been working on his Robert Klein doc for a long time. Last night “Robert Klein Still Can’t Stop His Leg” screened at the Tribeca Film Festival. It’s the most enjoyable film I’ve seen so far at the fest.

Fine did just fine (sorry) mixing archival footage, new material, and interviews with Klein’s many comedy disciples. They include Jerry Seinfeld, who lavishes praise on Klein, as well as Billy Crystal, Jay Leno, and others. Klein himself was a disciple of Rodney Dangerfield, of whom he does a hell of an impersonation.

Klein is credited by Seinfeld, et al for inventing observational humor. Much is also made of Klein’s classic comedy album “Child of the 50s.” Maybe the best pay off comes toward the end, with Don Rickles as the insults fly but also so does the respect.

It was then that I realized what Fine and Klein did so well here was make an excellent companion piece to the very good Joan Rivers doc of a few years ago, “A Piece of Work.” Since Alan King died rather young, and abruptly, and nothing’s been done on Stiller and Meara, there is very little documentary record of the great Jewish comics who launched from the Ed Sullivan show era. Fine’s film serves as not just a personal look at Klein, but as something larger. It’s a real piece of history.

But it’s also very funny. Klein is incredibly endearing and corny, while at the same time maintaining an edge. That’s why he made 40 appearances on Letterman. I hope The Weinstein Company can give “Still Can’t Stop His Leg” a good release in major markets before VOD or Netflix. Like a Robert Klein show, the film is intimate and hilarious.

PS Klein recalled during the Q&A of Rivers that while they shot a love scene once for a bad movie, she also managed to sell him three bracelets. Bah-dum!