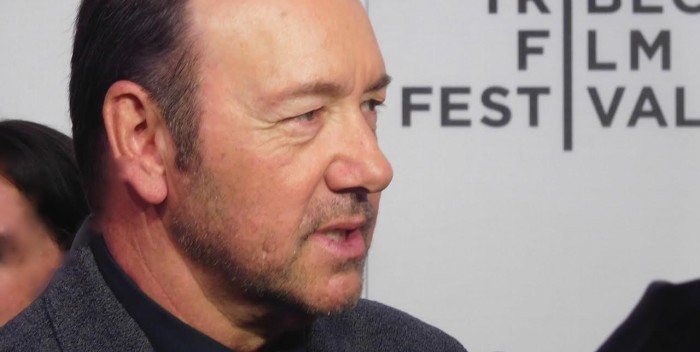 In “Elvis & Nixon,” the King of Rock (Michael Shannon) requests a visit with the President of the United States (Kevin Spacey), and the result is a sort of screwball comedy. Directed by Liza Johnson about one of the weirder moments of American political history, the movie is based on a true story in which the King leaves Nashville for the White House to persuade Nixon to deputize him as a federal agent at large for the Bureau of Narcotics and Dangerous drugs, a post which didn’t exist. After much Marx brothers behind the scenes goings on, Elvis got his request and the iconic photograph of Nixon giving the medal to Elvis and shaking his hand is the inspiration of the film.

The film premiered at the Tribeca Film Festival Monday evening.

Have they shown the film to any of the Nixon family or to Priscilla, I asked Kevin Spacey?

Spacey replied, dryly, “We’ve invited them all to a screening together in a tent but they haven’t said yes. We’re hoping.”

Spacey said of getting the role that, “Weirdly I had a kind of previous experience in attempting to play Richard Nixon when I tested for “Frost/Nixon,” which I will just point out is a movie I did not get.” He added, “So this is my revenge film.”

Shannon is an interesting choice for Elvis even if there is no physical resemblance he gets into the essence of the rock legend, mainly by watching Elvis films and documentaries. “I watched ‘That’s the Way It Is: Elvis on Tour.’ I watched press conferences, much like this one, particularly one he did in Houston, which pre-dates the events in this movie by a few months. I also had a great gift from Gary Schilling that Alex (Pettyfer) plays in the movie in the 45-minute interview that Elvis had recorded for Elvis on Tour, which they didn’t wind up using in the movie at all, so it’s an interview that not many people have heard. As all these people here will attest I listened to it constantly.”

Shannon is currently on Broadway in “Long Day’s Journey into Night.” He’s also in another Tribeca film– he does outstanding work in Bart Freundlich’s “Wolves.” Plus, never forget, he’s the seemingly dead General Zod in “Batman vs. Superman.”

I asked what surprised him the most about Elvis?

“His spiritual side, just how he was an intelligent person, and I don’t think people, I don’t that think they associate that with him as much as they should. He was a big reader. He was a big fan of cinema. I think the thing that I ultimately I walk away with is as much as success Elvis had, he was also very frustrated because I think that was an aspect of himself that he never got to show to the world.”

As for the karate moves and swiveling hips, “I Just watched him, just watched as much as I possibly could. The clothes helped, the costumes helped a lot.” And then to get away from the scrum of journalists, Shannon had one of the more original exit lines, “I am about to urinate on myself.”