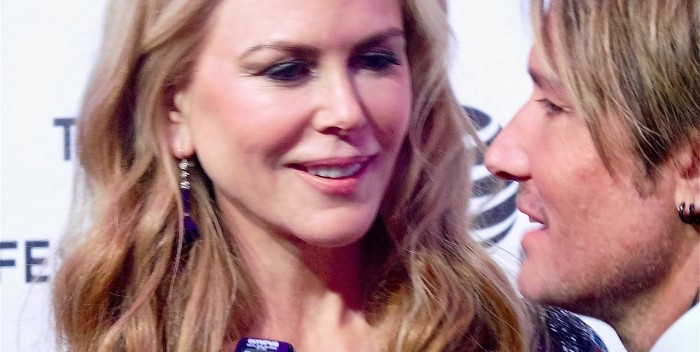 Nicole Kidman arrived early on the red carpet last night for the Tribeca Film Festival premiere of “The Family Fang.” She came with her husband, country music star Keith Urban — apparently they are still together and very happy despite supermarket tabloid reports to the contrary. (Drat! So much for “inside the shocking $250 mil divorce!”)

“The Family Fang” is a big deal for Kidman, who optioned the book and is also the executive producer. Based on Kevin Wilson’s 2011 bestseller, the screenplay is by Pulitzer Prize-winning playwright David Lindsay-Abaire, who wrote “Rabbit Hole,” for which Kidman received an Oscar nomination. (She won in 2002 for “The Hours.”)

Kidman and Bateman play siblings of avant-garde performance artists (Maryanne Plunkett and Christopher Walken) who use their children – often against their wishes – to pull off their outrageous public stunts.

I asked Kidman how she knew Jason Bateman was the right choice to be director?

“I’d seen ‘Bad Words’ and I thought his balance of humor and pathos was really strong, and I think he’s going to have an extraordinary career as a director,” she told me. “I think I’m fortunate to be in his second film. He’s off and running now.”

Bateman told me he’d like to take the Ron Howard route and transition from actor to director. “That’s my dream, that’s my goal, and I’ve told him. I try to pick his brain as much as I can about how he did it, how he does it as far as parlaying his experience and ambition as an actor into being a director and a producer and somebody who runs a company,” he said. “I’m trying to kind of put the little pieces together that might make that a reality one day.”

Asked if he’d read “The Family Fang” before Kidman approached him, Bateman said dryly, “I didn’t no, but that doesn’t mean anything. I’m not well read at all.”

Christopher Walken, wearing a heavy overcoat and scarf on the red carpet, made no pit stops at the premiere, but at the press conference earlier in the day he was talkative and in a great mood.

He revealed he is a Luddite, and doesn’t own a computer or even a cellphone.

“The thing about cellphones it’s like a watch. Everybody’s got one, so if it’s an emergency someone’s got one,” he told me. “There are times, like with a flat tire, that it could come in handy. But my wife always says to me, whatever you do, never look yourself up on the Internet.”

Walken said he became an actor by accident. “I was a dancer and I got a job as an actor. I have no idea how it happened.”

When he started out, Walken said he had a fantasy he would be a stand up comic.

“You know, to be by yourself on a stage and say funny things. I’m very impressed by that when I see it and I suppose I always wanted to do it. I never did.”

Instead, early on, he said, “I started playing troubled, disturbed people, suicidal, villainous, and I may have crossed some kind of line because it’s true: it’s pretty much all I get offered but most actors don’t work much so I can’t complain.”

What is his dream role, the one role he’d like to play?

“I’d like to play a nice man with kids. Have them say, ‘What should I do?’ Do the right thing! That would be nice, hey? And then of course, I’d do something terrible.”