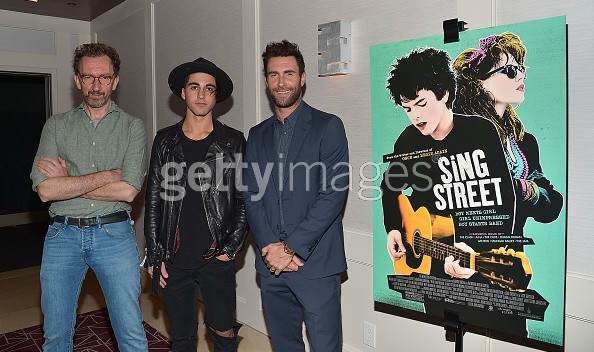 LA traffic being what it is, screwed up even adorable Adam Levine a bit Thursday night. Adam was meant to host a pre-reception for the new Weinstein Company film, “Sing Street.” He co-wrote a song called, “Go Now,” (not the Denny Laine song) with the film’s director/writer John Carney (“Once,” “Begin Again”). This is Adam’s second go round with Carney. Levine starred in “Begin Again” as well as writing some of the music for that film.

Adam left Universal Studios where he was filming “The Voice,” over the hill as they say here, to come to the London Hotel in West Hollywood in especially heavy rush hour traffic. He bounded in just in time to introduce the film. Before that, Weinstein’s David Glasser intro’d Adam Levine as “our favorite “Carney” alum.” (That is, unless Keira Knightley is around.)

Levine said, “I didn’t have to much to do with this, it’s all John. I co-wrote the song, “Go Now,” in the film. John wanted me to tell you guys that he’s a brilliant director, a genius and a visionary. Seriously he’s one of my favorite people in the whole world, I love him so much, this movie is fantastic and I’m honored for my small part in it.”

Carney was asked if his next film will incorporate music? “Not sure what I’m doing next, but I always seem to gravitate towards that.” I asked Carney afterwards about how a small town Irish boy is making it so big in Hollywood. “I live in Dublin. LA is way too much for me. But grateful to be here when I am, always.”

“Sing Street”– based in 1980’s Dublin– tells the story of a music loving 14 year old Connor (Ferdia Walsh-Peelo) and his strained home and school life, falling in love with a beautiful, albeit damaged girl named Raphina (Boynton) and his quest to start a rock band to win her affection.

“Sing Street,” has ginormous heart, bursting with sweet romance and beyond appealing enchantment. All are woven into the innocence of youth, touching relationships between friends and brothers (played by Reynor,) and teenage tribulations. Carney’s artistry binds them all together in a poetic, lyrical, humorous and touching way. “Sing Street” is a must see, with fantastic pop music to enjoy and add to your playlists!