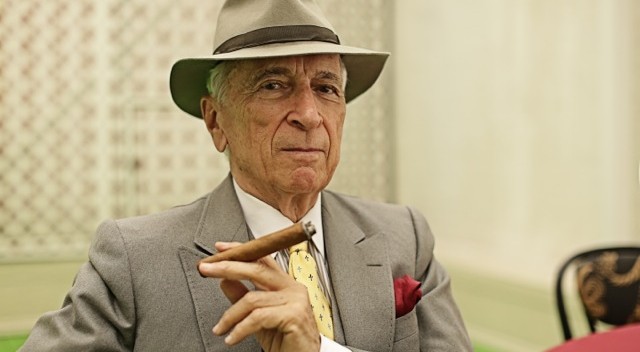 Gay Talese, the most dapper journalist in the world, is 84 years young. The famed for New York Times reporter and Esquire writer, and best-seller on the book charts, has just sold a book about sex and murder to Dreamworks and Steven Spielberg. The director will be Sam Mendes, Oscar winner for another Dreamworks movie many years ago called “American Beauty.”

“The Voyeur’s Motel” is the name of the movie, and it’s based on a piece from this week’s New Yorker that comes from a book of the same name which Gay will publish in July. The book is not long– 240 pages– but it details Gay’s correspondence with a man named Gerald Foos beginning in 1980. Foos bought a motel in Aurora, Colorado simply to spy on his guests having sex. He had two wives, and each of them helped him do it. At some point he says he witnessed a murder but never reported it.

Foos is still alive, and now has after all these years authorized Talese to write the story. Talese has his own questions, since after believing the murder story, there’s no record of it anywhere. Did Foos hallucinate it? Did it really happen? That whole aspect is chilling because the entire saga is so fascinating. Talese at 84 remains at the top of his game. I think this book is going to be a huge hit, and the movie will be, too. I’m sure Tom Hanks is already vying for the role of Foos. (Every good actor in Hollywood will want to play him, and the wives will be big roles, too.  Diane Lane, that’s you.)

By all means, read The New Yorker piece. You won’t be able to put it down.