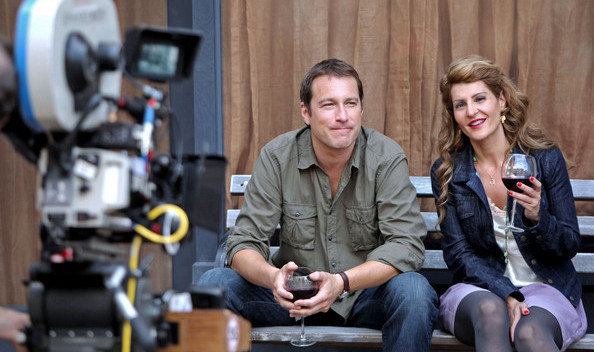 EXCLUSIVE It’s taken 14 years but Nia Vardalos has finally made the follow up to her hit rom-com. “My Big Fat Greek Wedding 2,” opens March 25, the same date as another small movie (the behemoth “Batman v. Superman”).

The film’s stars, with the exception of Kazan and Constantine sadly, promoted “MBFGW2” Saturday afternoon at the luxe Mandarin Oriental hotel against the backdrop of a jaw-dropping view of Columbus Circle.

Vardalos and Corbett don’t look like they’ve aged a day since the first film. Self-deprecating and warm, Vardalos is slender and petite and looked great in a short, greenish cocktail dress.

Entering the room, she told journalists, “I decided to go with the color of moldy feta,” she said of her dress. She completed the ensemble with a pair of comfy house slippers.

I asked Vardalos if she ever considered making a trilogy?

“I’m never going to say no again because I said no for so long, so I’m going instead to say this, ‘I’m open!”

Do you think it will take 14 more years?

“No, because I want to use that cast,” she said.

As for the frustrating lack of good roles and stories of older women, she told me, “It’s maddening. It’s maddening. If Sandra Bullock is trying to find a job imagine how hard it is for me? And Lainie Kazan and Andrea Martin, so I say I’m pro-woman without being anti-man. The men are well taken care of in this script as are the women. It’s easy to do isn’t it?”

Up next she said was the Epix series, “Graves,” co-starring Nick Nolte and Sela Ward and written by Josh Stern.

She’s also got a writing project in the works. She told me exclusively:

“I’m developing a play Off Broadway,” she said. “I adapted a book. I’m sorry I can’t tell you the title yet.”

When reminded her 11 year-old daughter would soon be a teenager, Vardalos whine, “God I know!”

Vardalos graciously posed for the inevitable endless selfies – the New York junket corps are as bad as the Hollywood Foreign Press when it comes to fawning over celebrities – and finally announced, “I’m going to shuffle off now in my slippers.”

As for Corbett, before exiting he said he was returning for the second season of the F/X comedy, “Sex & Drugs & Rock & Roll.” “We’re shooting right now.”

Corbett, who’s dated Bo Derek for more than a decade, was asked if there was any chance he’d change his mind about marriage and fatherhood. After all, he was told, Hugh Grant, once a confirmed bachelor, became until a father at age 49 and now he has three kids.

“No,” Corbett said, “But I have stronger will power than Hugh Grant.”