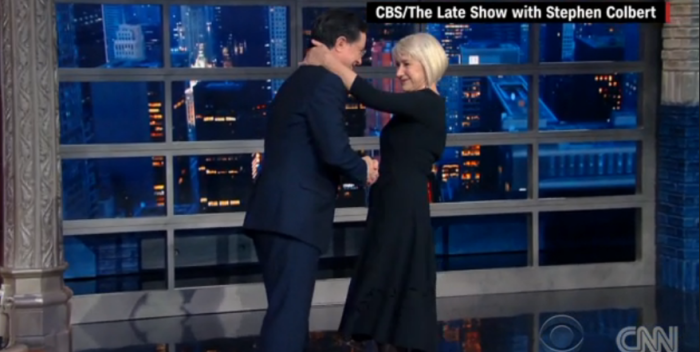 Gavin Hood’s edge of your seat thriller “Eye in the Sky” is making headlines as much as it’s ripped from the headlines.

“The thing is I’ve been deeply in love with Stephen Colbert for 15 years. For real,” Mirren insisted, “For real, no, no, for real. Absolutely, and as I was walking out last night I looked out, and I thought, ‘You know what? If I don’t take my opportunity now I’ll never have it again,’” she laughed. “I kissed him.”

Mirren is never boring, which is why we love her. The other shock is that she’s come to identify with the character she plays in “Eye in the Sky,” an Air Force colonel who orders drone strikes in the middle east from the safety of a bunker in Nevada. The whole premise of “Eye in the Sky” hangs on the chilling decision whether or not to blow up a party of terrorists — observed by a state of the art drone — even if it means killing innocents nearby.

“Eye in the Sky” has the kind of exceptional filmmaking that I think will keep it in mind all the way til next fall and awards season. It also happens to feature the final film performance of the great Alan Rickman, who died earlier this winter.

Mirren said of Rickman yesterday: “I think Alan would be incredibly proud of this movie. And I think he is very proud of this movie. Let’s put it that way. I think if you looked at his canon of work, and it’s been great work his whole life, I think if he had the choice to say I want that to be my last movie, I’m convinced he would point to this movie.  He was a brilliant first mate and bringing (that) to all these character roles he often played, but that is Alan, the elegance, the wit, the formidable nature of him, the humanity of him, and we have Alan up on the screen and I think that’s such a great thing for his last movie.”

I’m also happy to report that “Eye in the Sky” brings the return of Barkhad Abdi, the Minnesota-raised, Somali born Oscar nominee from “Captain Phillips.” This performance is quite different than the chilling pirate he played with Tom Hanks. It’s comic and intuitive.

For a while after “Captain Phillips” there was a worry that Abdi would get lost in Hollywood. But fear not– Abdi is working all the time including new films with Al Pacino and with Melissa Leo. He’s even opened a hot East African restaurant in Los Angeles called Madinah.

But Barkhad has not yet seen the other movie he opens in tomorrow– Sacha Baron Cohen’s “Brothers Grimsby.” When I asked him if he’d seen the raunchy comedy spoof of spies and football hooligans yet, he just shook his head with a big grin. He seems way too elegant to be in such a film. Luckily, his role is confined to the parts you can watch without hands shielding eyes!