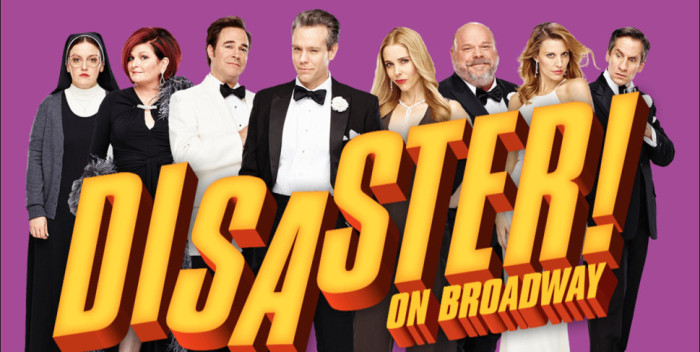 Wanna feel old? The curly haired thirteen year old boy who comes off as a solid professional, funny and with a great voice, is the son of Brian Littrell, of the Backstreet Boys. Wait? Is that possible?
But is “Disaster!” being a success possible? Jukebox musicals are always derided and few are hits– think “Smokey Joe’s Cafe” or “Motown.”

But Seth Rudetsky and Jack Plotnick’s parody (with Drew Geraci) of ’70s disaster movies (The Poseidon Adventure, Towering Inferno) — set to carefully selected Top 40 pop and disco hits– turns out to be too much fun not to love.

And then there are the newcomers– Baylee Littrell (the literal Backstreet Boy), Jennifer Simard (who pretty much steals the show as a gambling addicted nun), and the stunning Lacretta Nicole (she could sing the whole show and I wouldn’t have minded).

The 30 plus songs are not throwaways. The key to the show is that they’ve been woven into the script very smartly. They include hits by Carly Simon, Harry Nilsson, Michael Jackson, Donna Summer, Helen Reddy, Gloria Gaynor, Free, and so on. There’s no list in the Playbill, but basically it’s like listening to oldies on WCBS FM if they were organized around a central story.

The story is that Bart’s Tony is a low life producer who’s parked a tacky, leaking casino boat with no safety systems off a pier on the Hudson River. He’s using a nitwit chorus girl with long legs (York) who’s got her twins on board (Littrell, playing a boy and girl– hilarious). There’s a nun (Simard) who’s come aboard to save souls, an inquiring Times reporter (Butler) and her ex boyfriend who’s working on the boat (Pascal). There’s also a suburban couple with a lot of secrets (Chamberlain and Faith Prince, who’s going to make a strong case for a Tony nomination).

At first, “Disaster!” seems a little on the nose, and somewhat like a show that might actually be on a cruise ship. The choreography in the early scenes feels like it’s lifted from a bad ’70s variety show– it’s a little frantic. But once things settle down, the fun kicks in. And the second act just gets better, better, better.

My favorite moment– during intermission, Rosie said to Brian Littrell: “It’s so great to see you! How’s your little boy?” Littrell replied: “He’s fine. He’s on stage. He’s the kid in the show!” Rosie nearly fell over. Time flies! So does “Disaster!”