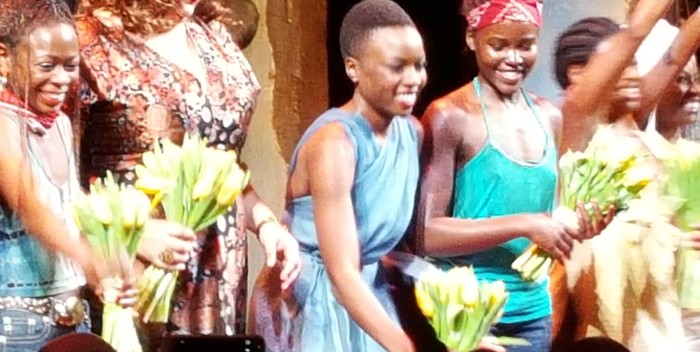 You never know what’s going to pan out in a Broadway season. But now the Public Theater has sent us the likely Best Play and Best Musical of this Tony season, and they are each created and acted by non white, dare we say mostly black, artists.

On Sunday night, an amazing quintet of women opened on Broadway in “Eclipsed,” a play about female warriors of the Liberian Freedom movement circa 2003. Oscar winner Lupita Nyong’o stars in it, but all of the women in this remarkable play are superstars. Playwright Danai Gurira (you may know her as an actress from TV’s “The Walking Dead”) is the star of the spring season. Liesl Tommy directs with enormous imagination and sensitivity.

We know Lupita as the “overnight star” from “12 Years a Slave.” But the Yale Drama School grad was already a theater sensation when she won her Oscar. The four other actresses–Saycon Sengbloh, Akosua Busia, Zainab Jah, and (my personal favorite) Pascale Armand are absolutely sensational. These Liberian women are held hostage, raped, and treated like animals. Still their sense of humor is intact. And Gurira has woven in a witty bit about the Clintons and Monica Lewinsky to lighten the darkness.

So here we have “Eclipsed.” But the Public also gave us “Hamilton,” the presumptive winner of any award available and certainly the Tony for Best Musical. The soundtrack is a bestseller, the show was featured on the Grammy Awards, tickets are impossible. The Pulitzer Prize is looming for Lin-Manuel Miranda’s work of genius.

And lest we forget– coming shortly is “Shuffle Along,” directed by George C. Wolfe, with an all star black cast starting with Audra McDonald, Brian Stokes Mitchell and Billy Porter. What a group!

Plus, the revival of “The Color Purple” is a knockout, with plenty of awards coming, including Best Actress in Musical for Cynthia Erivo and Supporting Actress for Jennifer Hudson– nominations if not the actual awards.

And Oscar winner Forest Whitaker may be closing in “Hughie.” But his performance will certainly be remembered in the awards mix.

#BroadwaySoBlack? or The Great Black Way. What a nice surprise that the theater can show movies the path to the future.