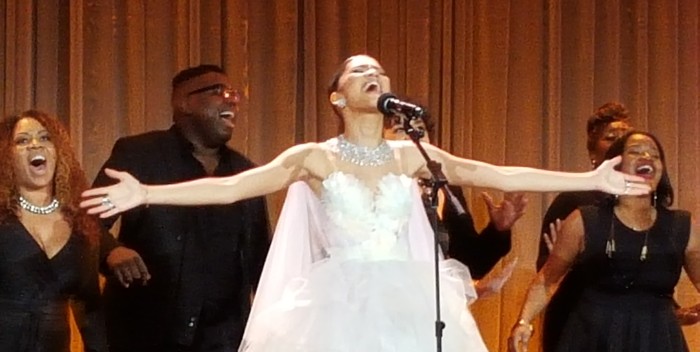 Lady Gaga is a professional so she absolutely went to Oscar rehearsals yesterday. Her performance tonight will be amazing, introduced by Vice President Joe Biden and featuring 50 women who are rape survivors.

But when Gaga appeared at Harvey Weinstein’s star studded private dinner at the Montage Hotel in Beverly Hills last night, she had a lot to say about the situation with Kesha and Sony Music. She said, “I got so upset thinking about Kesha I almost didn’t go to rehearsals. But of course I did, because I had to.”

Gaga, looking like a million bucks in a black and white couture outfit, showed up at the party just as it was winding down. She brought fiance Taylor Kinney and her manager Bobby Campbell, and they were all pretty excited about what they’d seen down at the Dolby Theatre.

Still, Gaga says she is in constant touch with Kesha. “I know a lot more than I can say in public right now,” she told me. “Every female artist has some kind of story of being held back by a man. And I’m thinking of all the female artists now who are trying to make it.”

Gaga did join Elton John on Saturday afternoon for live show in the Tower Records parking lot that was live streamed on aol.com. They performed Elton’s great hit “Don’t Let the Sun Go Down On Me.”

New hit singer Zendaya performed a smashing version of the title song from Harvey’s Broadway hit “Finding Neverland” with about a dozen back up singers. The show is about to welcome opera star and “Les Miz” vet Alfie Boe as J.M. Barrie– so here’s a scoop– Kelsey Grammer told me he’s extending his run to overlap with Boe at the end of March. Very cool.

Also part of last night’s entertainment: some selections from Weinstein’s upcoming Broadway revival of “Singin’ in the Rain.” The show was a hit in Paris last year and will arrive in New York in January 2017.

PS Chrissy Teigen is so lovely. She wore a red gown, but she is due to give birth in April to a baby girl. “Don’t you know that already?” she joked. I guess the tabloids know all this stuff. They do not have a name. John told me he’s starting to think about a new album. He and Common will present Best Song tonight — they won last year for “Glory.” John told me that when he was at rehearsals, “I felt nostalgic.” John Legend is celebrating his 12th anniversary this year as a music star. Is that possible? Time flies. And he only gets better and better!