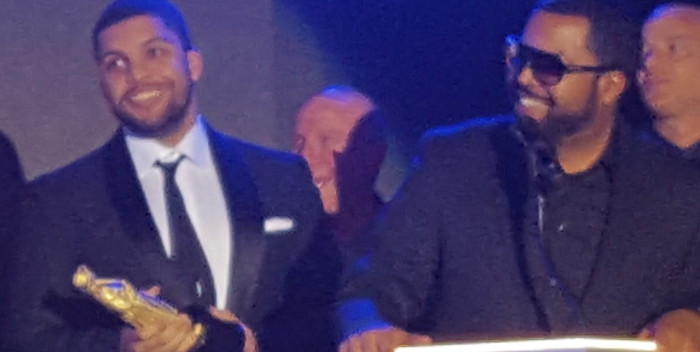 And I was there, at Lure nightclub, for an ebullient seat of the pants start up awards show. Pulled together in 10 days by Russell Simmons, the first ever All Def Movie Awards was something those of us who were there will not forget. I got to meet great actors who aren’t often in New York: Sanaa Lathan, Regina Hall, Michael Ealy.

Amber Rose asked to take a selfie with me. Ice Cube and his son O’Shea Jackson Jr. were there to pick up Best Picture for “Straight Outta Compton.” The great Bill Duke was in the audience, as was J.B. Smoove. Tyrese Gibson and Snoop Dogg (smoking a joint, ‘natch) were presenters. I got to hear a very funny comedian– Tony T. Roberts, who will be in the new “Uncle Buck” TV show.

The whole thing will air all night Sunday on Fusion TV as a one hour special, against the Oscars. Just about everyone who got an award (called a Pimp) was thrilled because they’d never won anything before– or were nominated for anything. There was gentle roasting of the Oscars and white Hollywood, but nothing overt. Mainly I was impressed that Simmons could pull this together so quickly, and how nice it was for a first ever event.

My favorite line of the night, from Tony T. Roberts: “I was supposed to be in Straight Outta Compton, but I was too ticklish.” I don’t know why, but I’ve been laughing about that all night.

Refresh a little later today for more, and for the full list of winners and some speeches. By the way, Amber Rose won an award called Most Likely to Steal Your Girl. It was very clever, and so was she in her acceptance speech. Hollywood is ignoring an entire world that’s operating very successfully within its confines. Time to wake up, people.