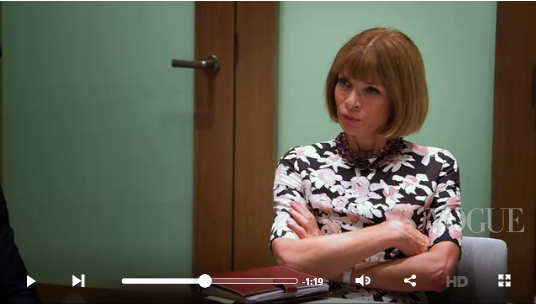 Why do the Taliban hate us? Isis? Isil? Al Qaeda? The answers will be found in the Tribeca Film Festival’s opening night film, “First Monday in May.” (This has nothing to do with “First Monday in October,” an old play that starred Jill Clayburgh as the first female Supreme Court justice.)

No, this is all about Anna Wintour and her annual pageant at the Metropolitan Museum of Art. Celebrities comes in outrageous designer dresses, and there’s a lot of fawning. Kardashians are allowed in proper company. And so on.

Haven’t there been enough documentaries about Vogue magazine? Didn’t “The September Issue” fill this need? Alas, that movie showed Grace Coddington– recently ousted from Vogue–as a sympathetic survivor to the Wintour regime. Now, in “First Monday in May,” Wintour wears sunglasses at indoor meetings and makes snarky comments about her guests. Wait– wasn’t that “The Devil Wears Prada”? And where is the upbraiding after Wintour’s mugging in “Zoolander 2,” a flop that she featured so prominently on Vogue’s cover this month?

Anyway, Tribeca is as far away as it could be from the Met and the Costume Ball. I wish the opening night film had less to do with a party than with independent filmmaking. And really, the sunglasses are getting old at this point.