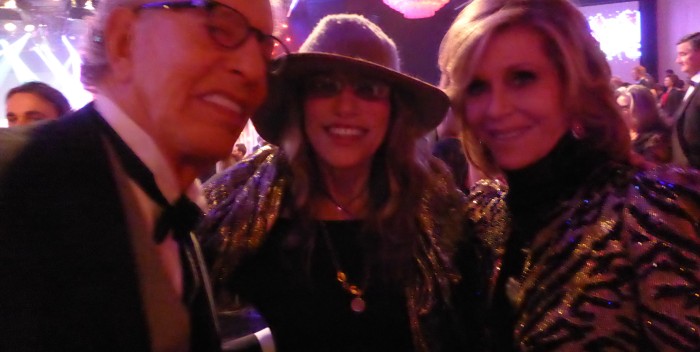 Clive Davis’s 40th anniversary pre-Grammy dinner was off the hook both on and off stage. Carly Simon flew in from Martha’s Vineyard and surprised the A list crowd with a rare performance of “You’re So Vain”– featuring son Ben Taylor on guitar and vocals– that drew a thunderous standing ovation. I’ve never seen the crowd react like that, and everyone sang along. Carly’s voice remains mellifluous and despite her famous stage fright, she held the crowd in the palm of her hand.

Other performers included Nirvana with Beck on a David Bowie tribute–“The Man Who Sold the World”– plus Melissa Etheridge, Chicago, Earth Wind & Fire, Fetty Wap, Elle King, Tori Kelly, Adam Lambert with Jack Antonoff, Andra Day, and Barry Manilow. Plus there was an emotional screening of Whitney Houston singing “The Greatest Love of All” from 1990.

And then there were the guests in the Beverly Hilton ballroom: from Ringo Starr and Barbara Bach, Joe Walsh (married to Barbara’s sister Marjorie) and Olivia Harrison (with Lesley Glover ex wife of Dave Edmunds) to a table that included– yes one table– with Sylvester Stallone and Jennifer Flavin, Michael Keaton, Chris Rock, and Caitlyn Jenner with a date (Candice Cayne). Another table with Gwen Stefani and Blake Shelton in full PDA, also Christina Aguilera.

Katie Couric came for the first time to a Clive Davis party with husband John Molner. Les Moonves and Julie Chen, Alan and Debbie Grubman all came in after attending Jimmy Iovine’s wedding at David Geffen’s house. Russell Wilson was there with Ciara, and Harry Styles of One Direction was low key, as was famed songwriter-producer Max Martin.

On table featured Alice Cooper, and his famed manager Shep Gordon along with KISS’s Gene Simmons, Shannon Tweed, and Paul Stanley. Near them was a Broadway table– Matthew Morrison, “Color Purple” producer Scott Sanders, and amazing songwriting couple Barry Mann and Cynthia Weil, who are characters in “Beautiful” on Broadway and authors of dozens of Brill Building hits including “You’ve Lost that Lovin’ Feeling.” Legendary songwriter Mike Stoller with wife Corky, and Valerie Simpson, were near by.

There were tables of lawyers and agents, like Joel Katz, Don Passman, and John Branca. NARAS president Neil Portnow gave famed manager Irving Azoff the Icon Award and Irving– feared by many– almost started crying when he talked about Glenn Frey of the Eagles, his great friend who just died.

I ran into at least two people who are distantly related to me. I met many new wives, second and third wives, fiancees and girlfriends who’d succeeded last year’s companions. Clive made lovely mention of Natalie Cole, BB King, and Percy Sledge, and Michael Ahearn, who produced the party for years. Jackie Collins was sorely missed.

There were ZERO Kardashians or reality show people other than Caitlyn, who let me tell you is about six foot six in heels.

PS Met Zayn Malik, formerly of One Direction who did the photo op and skedaddled despite being an artist signed to RCA (part of the extended family of this party) whose label heads Tom Corson and Peter Edge were also there. He is slight, with very tall hair and many tattoos. The whole proceeding may have been too overwhelming for him.

Second PS shout out to Sirius radio’s Tracey Jordan, and New York pr expert Gwen Quinn, ex officio of the Aretha Franklin inner circle. The Queen of Soul’s ears must have been burning!

Photo attached c2016 Showbiz411. Who wouldn’t want to be Richard Perry? Lives with Jane Fonda, his most famous recording artist is Carly Simon. Here they are, all together in a rare moment.