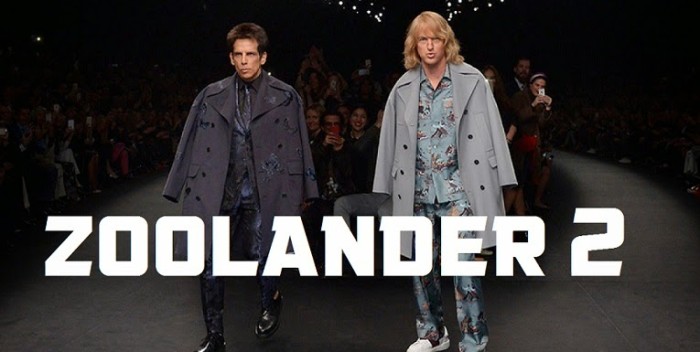 SPOILER ALERT Justin Bieber is killed in the first few minutes of “Zoolander 2,” his body riddled with bullets. There was applause when this happened last night, at the premiere at Alice Tully Hall. Later in the movie, Will Ferrell mentions the killing of Bieber rhetorically and gets a good laugh.

Otherwise, the laughs are hard to find in “Zoolander 2,” as Ben Stiller said last night, “sequel to a movie that wasn’t a hit.” One “Zoolander” (2001) was more than enough. This one has no plot or story so Stiller and Justin Theroux et al. fill it up with celebrity cameos galore– so many that you lose count.

Bieber is only the beginning. Billy Zane from “Titanic” has a big part, Susan Sarandon is in there, Sting has a pretty sizeable part (and he’s funny), Benedict Cumberbatch also does (and he’s quite good as a zombie like transsexual), plus you’ll see Ariana Grande and a shrunken Fred Armisen and god knows who else (Katy Perry, Matt Lauer, a bunch of different TV correspondents).

Maybe that will be a selling point– like “Where’s Waldo?”– trying to spot all the celebs and quasi-celebs playing themselves. But what about the actual movie? How about finding the actual actors? Kristen Wiig is virtually unrecognizable. Ben Stiller, Owen Wilson and Will Ferrell are the only distinct people left over from the first movie. Penelope Cruz is so gorgeous that is doesn’t matter we have no idea what she’s doing.

But instead of being a sly satire of fashion, “Zoolander 2” has been made into some of kind of “Avengers” movie– although I’m not sure if it’s supposed to be a parody or is straight on. Either way, there’s so much of it, heaped on more of it, with lots of special effects and filler, that there’s no way of knowing.

It doesn’t help that somehow Anna Wintour, the editor in real life of “Vogue,” shrewdly depicted in “The Devil Wears Prada,” actually has a speaking role as a fashion villain– along with Vogue advertisers Tommy Hilfiger, Marc Jacobs, Valentino, and so on. By the time they all show up, the movie is so inside and up its own derriere, that it doesn’t matter.

It’s not like I’m not a Ben Stiller fan– I loved “Tropic Thunder,” and I admire greatly his acting in Noach Baumbach’s movies “Greenberg” and “While We’re Young.” But his directing “The Secret Life of Walter Mitty” was a disaster in the same way that “Zoolander 2” capsizes under its own weight. He needs a script editor, badly, because his really good jokes and pungent satirical moments get lost in a sea of too many ideas.

The scene at Lincoln Center was rather priceless, by the way. MC Hammer and Neil deGrasse Tyson (each in the movie– don’t ask) were there, and met in the lobby, as were Molly Shannon (with her kids), Broadway director Diane Paulus, and TV actor-comic-scandal magnet Andy Dick, among others. Dick headed off to dinner with Ben Stiller’s sister, Amy. Many were not invited to the after party thrown by Anna Wintour and Valentino across the street at the Lincoln restaurant. (Anna chose the list– and she doesn’t really like anyone. How she can see anyone from behind those dark glasses is anyone’s guess.)

But I did see one of those tall Jenner girls, who arrived with a team of stylists and assistants. She’s like a giraffe. Then came her mother, Kris, in a huge fur coat. It’s very instructive how Anna Wintour has embraced low culture as a way of selling Vogue in a time when magazines are just about dead. Her most famous predecessor, Diana Vreeland, would be completely horrified. But it’s just the way Donald Trump has skillfully cultivated rednecks and the working class, convincing them he’s their friend. Harvard should study how they’ve done this.

There were several children in the audience. This movie was not for them, so be warned. They didn’t like it.