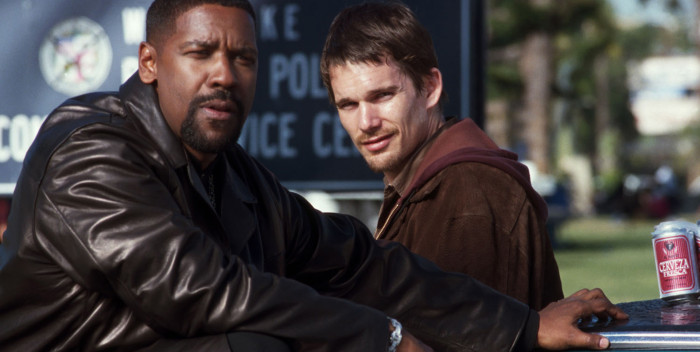 All the 40 to 55 year old black actors who thought they might get a chance to play Denzel Washington’s Oscar winning character from “Training Day” on TV: put your guns down. The TV series will be the opposite of the movie.

The scene chewing older cop with his own set of rules is now white. Get ready for any number of white actors to polish up their Emmy speeches.

In the new version, Frank Rourke is the “wolf, a rogue cop, and a man who lives by the law of the jungle.” His protege is Kyle Craig, a young naive black trainee who will try and take Frank down. That would be the Ethan Hawke part from the movie.

Speaking of Hawke, he may play his own role from the movie as a recurring character. Right now, that character– Jake Hoyt– is deputy chief of police 15 years after the “Training Day” movie (2001). But it’s unclear if Hawke would play that part.

I’m surprised they reversed the leads for the TV series, especially since Antoine Fuqua is directing again. Frank would have been one of the few– maybe the only– juicy lead role for a black adult actor on TV. Another opportunity lost. Blair Underwood, it coulda been you.