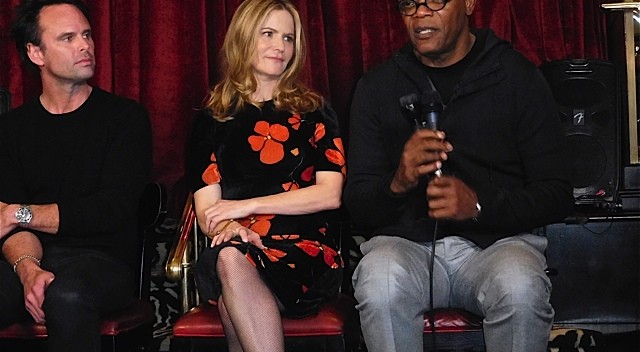 Harvey Weinstein introduced Uma Thurman and mentioned the remarkable relationship between the director and his muse and the three films they made together. “Hopefully they’re planning a fourth,” said Harvey, somehow also managing to get in a dig at Republicans and their denial of global warming in his brief introduction.

Uma Thurman spoke about how she met Quentin 20 years ago over dinner, “interrupting each other constantly from the get go over a three and a half hour conversation – and then we made a few films.”

Thurman said she was one of the few people who “he shows his scripts to when he births them – Sam is also on the list,” adding that neither of them had “leaked the script” on the Internet.” The guests laughed.

Thurman spoke about of Tarantino relives the narrative of his invented characters. There was more laughter when she whispered, “I don’t think he does any research. But that’s the scary part,” he said. “I accused him of doing no research but being somehow, some kind of intuitively brilliant channel of what is a very real experience.” Thurman added, “Sam, Jennifer, Walton, you guys were amazing! And believe me I know, when you see them cold, they were cold. When you see them hurt, they most likely did.”

Jackson met Tarantino in 1992 when he auditioned for a part in “Reservoir Dogs.” He was supposed to read Harvey Keitel and Tim Roth but neither actor was there, so he ended up auditioning with Quentin and producer Lawrence Bender.

“They just seemed to be two horrible actors. I left that audition thinking, ‘God those guys sucked, so I probably am not going to get that job and I didn’t.” At Sundance he attended a screening of the film and afterwards told the director how much he liked it. Two weeks later Tarantino sent him the script for “Pulp Fiction.”

Jennifer Jason Leigh, who is making her first film with Tarantino, said she had no idea what the set would be like. She laughed,  “I t’s a party. It really is a celebration and we were pulled and all the rest of it.” Uma — who sat near me– also laughed.

“We had the best time I think all of us have ever had in a movie. We wept when it was over,” said the actress who plays Daisy, a mysterious woman with a past who is being transported to the hangman. There was music between set ups, she said and drinking to celebrate. “It started with Champagne Next time it was tequila. It doesn’t matter what time of day. Everything stops and there’s like a 45-minute party” to celebrate a good scene.”

It was noted that one of the actors – not to give away spoilers – asked to continue to come to the set and play his dead character after he was killed off.

“He’s still there on the floor,” Uma shouted out, “for Oscar consideration.”

Sam Jackson spoke about the importance of dialogue in Tarantino’s scripts. “I look for conversations that the characters have inside the story. It’s all just natural conversations. There’s nothing false about it. It all seems very genuine. The back and forth is wonderful cause we spent a majority of time making movies that are at least two-thirds action, where two-thirds of the script is go this way, do that, jump of this, drive, open this door, shoot that way, walk! And when you look at Quentin’s script, they’re six-eighths dialogue. It’s exhilarating!” he said. “ It’s like you’re about to go back on stage.”

The director famously doesn’t allow cellphones or other electronics on set so actors and crew tend to bond. “When Quentin says ‘Cut!’ we’re like either dressed in blood or too cold to go outside, so we sit and talk to each other. We talk about what we just did or laugh at each other and say, ‘Is this shit really as good as we think as it or we just blowing smoke up our own ass?’”

The crew can’t text. They watch the actors perform. “They applaud sometimes. They pat us on the back. Those are things that don’t happen on everybody’s movie set,” he said.

The moderator noted that some people were “aggrieved” on Jennifer’s behalf particularly, for the number of times she gets whacked – she is covered in blood for most of the film – and the enormous number of times the ‘n….r’ word gets thrown around.

This is an issue Samuel Jackson’s long addressed nowhere better than during the conversation.

“Like I said before,” said Jackson, “ Quentin doesn’t write anything that’s not genuine. Having grown up in the South, during segregation, I understand the conversation. I understand what he puts in characters’ mouths and why it comes out. I don’t understand why they continue to have this fixation with what he writes, because he writes about a specific subject, he has to use a specific word.”

Jackson mentioned more offensive words than the ‘n” word that the director could have used. “ But when you say ‘n…r,’ everybody knows specifically who you’re talking about. There’s only one in the movie.” Uma laughed. “You got me! Major ‘n…r.’ Oh yeah me.”

“I don’t understand the whole craziness about it or people spending their time sitting in a movie counting the number of times the word is said.” Jackson said, noting that there is a song in “Twelve Years a Slave” where the “n” word is said “ like 300 times, but nobody said, ‘Oh, why was that song in the movie?’”

As for Leigh’s character, who gets whacked throughout the film, Jackson said his wife had a problem with that on an initial viewing.

She asked, “Damn, how many times you gotta hit Jennifer?’ As many times as it takes for her to get the message.”

Jackson added, “We’re in the middle of that story every day we don’t even think about it, so the first time he hits her and I’m standing there, it’s kind of like, ‘Oh, okay,’ but as the movie goes on you do realize she’s dangerous. She’s not really like not used to being hit. She’s got some experience taking a punch,” he said.

She even baits other characters into hitting her. She’s plotting revenge. “She knows your time is coming. Also, this is a time when you know nobody was taking cellphone pictures of her face and putting them on the Internet. “It’s an incident in time. Men abused women in that way, especially if they were criminals. He’s taking her to be hung. He didn’t have to deliver her in a pristine manner.”

Jackson also mentioned that Jennifer Jason Leigh had a hard time saying the “n” word. “She said it a little tentatively for the first few days and then we finally got in the moment,” Jackson said. “I never had to say to her, ‘You need to get with it.’ We had to say that to Leo. Leo’s like, “Do I have to say…”? I told him, ‘Dude, if you’re going to do this movie you got to get real comfortable” with  ‘n…r’ real quick. Stop playing. You see the results in ‘Django,’ he got pretty comfortable with it.”

As guests exited the very pleasant brunch, Uma laughed at an inside joke about Quentin, adding, “He’s such a fucking liar!”