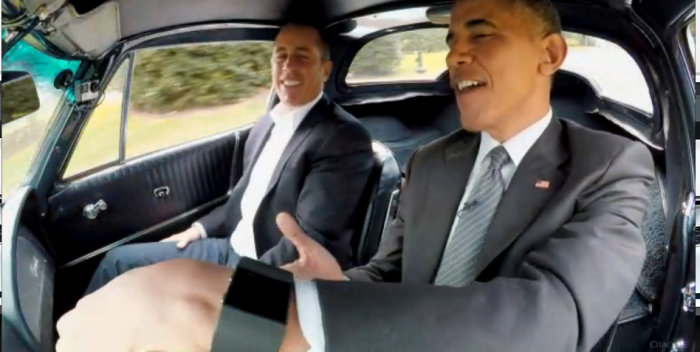 I think I learned more about Barack Obama from this episode of “Comedians in Cars Getting Coffee” than any interview he’s done before. First of all, he does think most world leaders are nuts. Second, he wears a sleek black electronic watch, but not an Apple watch. He also picks out his own suits in the morning, gets a wake up call, and shaves before he works out.
Seinfeld: “Have you ever gone on ebay?” Obama-without hesitation: “No.”
Obama: “Do you still do stand up?” Seinfeld (incredulous): “Do you still give speeches?”

PS If you know what brand that watch is in the picture, tweet me @showbiz411. In most photos Obama is wearing a round, old fashioned analog watch, usually something Swiss with a black dial.

From Crackle: Just Tell Him You’re the President