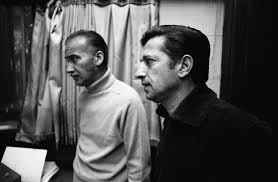 Pop music wouldn’t be the same without the team of Luigi Creatore and Hugo Peretti. As Hugo and Luigi, they produced countless hits beginning in the early 60s. Their handiwork runs from some Sam Cooke Top 40 hits through Van McCoy’s disco classic, “The Hustle,” a bigger record in 1975 than Adele could hope for now. (Too big, some might say.)

Hugo and Luigi also ran Avco Records in the early 70s, where they gave the us the Stylistics. However, Thom Bell and Linda Creed wrote the hits. But Hugo and Luigi got them on the radio, from “Betcha By Golly Now” to “You Are Everything.”

They co-wrote Elvis Presley’s hit “Can’t Help Falling in Love” (‘wise men say’..) with George David Weiss.  They also recorded Della Reese, who if you listen to her now (the star of “Touched by an Angel” is still very much alive) sings the socks off of today’s divas.

The pair did write English lyrics for “The Lion Sleeps Tonight,” the doo wop hit that was stolen from an African songwriter named Solomon Linda. But they didn’t “write” the song, as the New York Times reports tonight. And eventually Linda’s estate got some money back from the long chain of events.

Still Hugo and Luigi were an unsung powerhouse whose work lingers on radio. I hope they made their money because pre-1972 recordings are played for free on the radio, and producers usually don’t reap royalties.

A moment of silence, and then, a disco ball: