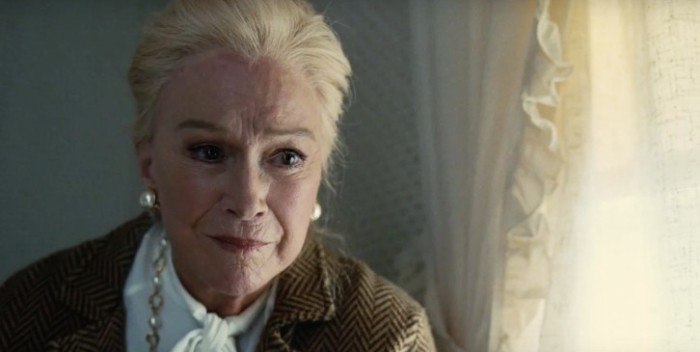 Diane said: “It’s the first time I had to use method acting for narrating, because I’ve never narrated a film before.  First of all, they finished the movie and then they called me to narrate, which was a great honor.  It took like 20 times for each time to do it, and each time I had to get myself in that place, and use something, method acting, to get into that place so that nothing could take me out of it, so that I could present in my voice, unconditional love.”

Ladd– who’s never won an Oscar but has been nominated three times (Alice Doesn’t Live Here Anymore, Ramblin’ Rose, Wild at Heart)– explained that director Russell was key for her. “He guided me like a lighthouse, so I didn’t waver, like a steady ship on the water.  If I wavered that would kill it.  I was the only person who loved her who gave her strength.  I couldn’t be judgmental.  David made sure I wasn’t.”

Sylvester Stallone and wife Jennifer Flavin were special guests at the Fox party, even though his movie Creed is at Warner Bros. Stallone is now in the running everywhere for best supporting actor as the character he created 40 years ago, Rocky Balboa.

Sly told me: “I was careful not to cross the line with Rocky.  I wanted him to be real, humble and true in all ways.  I’m really surprised at the reaction; I never thought it would be taking off like this. “

When I told him that the scenes of Rocky receiving chemotherapy got me, as I had just gone through it with a family member, Sly told me that, “so many people have been telling me that.  Everyone is seems has been affected by cancer, and people from all over tell me that again and again.  I’m really honored to be a part of this.”