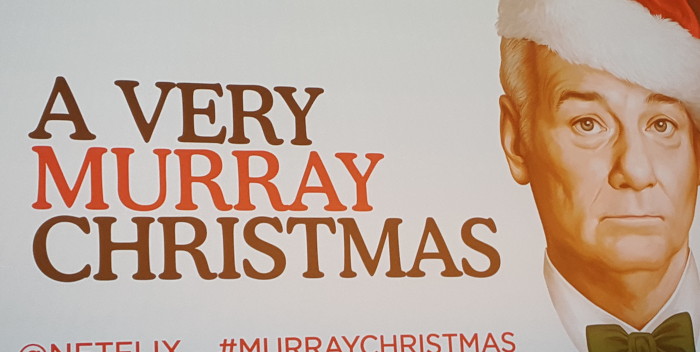 No one
really knew what to expect last night at  the Paris Theater when Bill Murray and Sofia Coppola unveiled “A Very Murray Christmas” for Netflix.

But the hour long special is a gem, a gift box stuffed with toys and candy. Murray hosts the one hour show written by Mitch Glazer with a boatload of guests including Chris Rock, Miley Cyrus, Amy Poehler, the rock group Phoenix, Jason Schwartzman, George Clooney and a boffo warbling Maya Rudolph. Paul Shaffer is the on camera musical director, and Dimitri, the beloved maitre d’ at the Sunset Tower Hotel dining room in West Hollywood, has a special role.

Most of it was filmed at the famed Hotel Carlyle on New York’s Upper East Side, the most swellegant hotel in NYC.  There are also loads of famed session players doing the music starting with drummer Steve Jordan and singer Cindy Mizelle.

The screening boasted all of these people as well as socialite Lee Radziwill, sister of the late Jacqueline Kennedy Onassis, and Trudie Styler who came with sister in law Anita Sumner (one of Sting’s sisters) plus Steve and Maureen van Zandt.

I just loved this special. Sofia Coppola– dad Francis Ford Coppola was in the house last night as well as brother Roman, who produced the show–outdid herself with a jaunty, sophisticated take on the old Bob Hope specials. Murray has never looked more focused, singing Christmas carols, performing the old Stax Albert King song “Santa Claus Wants Some Lovin'” with Clooney et al. Maya Rudolph offers a sensational “Christmas (Baby Please Come Home”). Everyone’s in formal attire. It has the feel of a party from a Preston Sturges movie or a Dean Martin special.

You will want to get Netflix just to see this show, trust me.