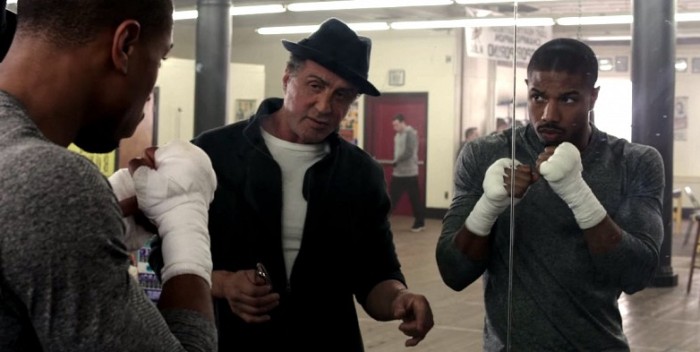 I am not surprised by this news at all. The “Rocky” spin off “Creed” starring Michael B. Jordan and directed by Ryan Coogler is already set for a sequel. The Irwin Winkler-produced film, which features Mr. Sylvester Stallone, doesn’t even open for four more weeks (November 25th). But the film is so good, and everyone in it is said to be so appealing, that “Creed II” is on the drawing boards, and don’t think a third part isn’t as well.

I gleaned this information from a reluctant Mr. Winkler today at Michael’s where the famed producer (and director of two Robert DeNiro movies I really like still called “Guilty by Suspicion” and “Night and the City”) was dining with powerhouse PR rep Leslee Dart. Winkler is currently producing a new film by Martin Scorsese (Leslee’s beloved client)  called “Silence” which we will see next year starring Andrew Garfield and Adam Driver. I have a feeling “Creed” is going to be the surprise Oscar movie of the season. Let’s see what happens.

Meantime, Michael’s was buzzing for a Thursday, with a dizzy list of New York media types. David Denby, the best movie critic ever, was lunching with his legendary book editor from Simon & Schuster, Alice Mayhew (she’s given us every important non fiction book from S&S for the last 30 or more years).  Another Hollywood movie producer, Mike Medavoy, rolled in on his way back to L.A. from Spain, where he’s overseeing Terry George’s “The Promise” with Christian Bale and Oscar Isaac.

Who else? More legends:  sexy, glamorous Marisa Berenson, who lives mostly in Morocco and Paris, in town to launch her new book (more on that shortly); Nikki Haskell downloading New York’s nightlife history to Page’s Six newest addition, Carlos Greer; director Joel Schumacher, looking natty, chowing down with associates; Michael’s regulars Gerry Byrne and David Patrick Columbia each commanding their own tables; two pr gurus– Matthew Hiltzik and Steven Rubenstein, separately; and so on and so forth.

My table? I was happy to be with two beautiful ladies– pr guru-ette Norah Lawlor, and internet expert Shana Schlossberg, founder of EZBZ (www.myezbz.com). Shana is a trained and accomplished opera singer who also knows her way around a url. Her EZBZ is an on-line personal concierge service, with 350,000 users already in the U.S. They can find you whatever you need — legal things, please– in a flash, from a plumber to a party clown. Or an opera singer. Most of the Michael’s crowd will be signing right up!