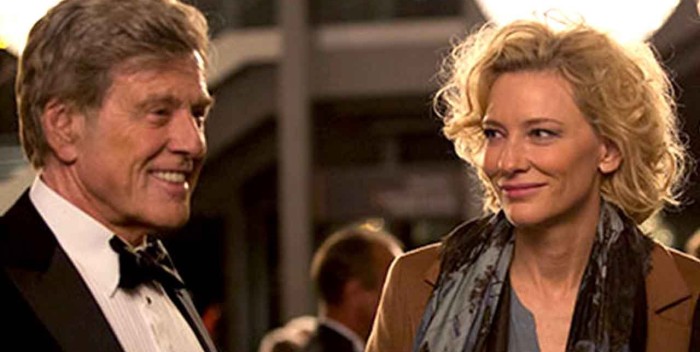 Everyone should have this problem. This year Cate Blanchett has it worse than when Kate Winslet was in “The Reader” and “Revolutionary Road.”

Blanchett stars in both “Carol” and “Truth.” She does equal work in each, the best of her career and the best of the year. The Academy rules say one nomination per category per person. If they give two awards to Blanchett, they will get one speech. At least that cuts down the time of the show.

I told you about Cate’s exquisite work in Todd Haynes’s “Carol” last week. Last night I finally saw James Vanderbilt’s movie “Truth” in which Cate plays CBS producer Mary Mapes and Robert Redford — in a performance that will surprise everyone — embodies Dan Rather and does his own best work in years. (Except I did love “All Is Lost,” but he never spoke. Here, he talks. And is great.)

The great thing about “Truth” is you never what the truth is, and the filmmaker doesn’t force one idea of it on the viewer. This is a warts-and-all retelling of what Rather and Mapes endured at CBS a decade ago when their story about George W. Bush’s career in the Air National Guard imploded. It ended both of their illustrious careers at CBS.

You can love this movie without taking sides, which is sort of great. Personally, I feel that CBS and Viacom were cowards, didn’t stand up for their people, and buckled. CBS is making noises against the movie, and Sony is brave to take on Viacom, CBS’s parent company, by releasing the film.

“Truth” is absolutely among the best movies of the year. The supporting performances by Topher Grace, Dermot Mulroney, and John Benjamin Hickey stand out, as does Bruce Greenwood (Hollywood’s all star MVP) as former CBS News chief Andrew Heyward. Stacy Keach has a nice turn, too, as Mapes’s source for the story.

Last night’s premiere at MoMA and Armani brought out the cast as well as directors Taylor Hackford, Julie Taymor, and Bennett Miller. It was nice running into Caroline Rhea, who just about plotzed when she finally got to meet Redford.

Redford probably won’t campaign for an Oscar. He didn’t for “All Is Lost.” But he should, a little. And I urge Academy voters to put him in, I think for supporting, because he is exceptional in this role. He doesn’t look a bit like Rather, but transforms himself in a very neat piece of acting. Think of it: Rather hasn’t played real people since Bob Woodward 40 years ago. Here is one playing another living one, and morphing into him. He gets Rather’s speech and walk just right, without making it an imitation.

As for Blanchett, what do we do? She is on fire. Mary Mapes isn’t a celebrity, she was always backstage. But this is Blanchett’s “Norma Rae,” or “Erin Brockovich,” or “Silkwood,” or “Coming Home.” She’s completely captivating.