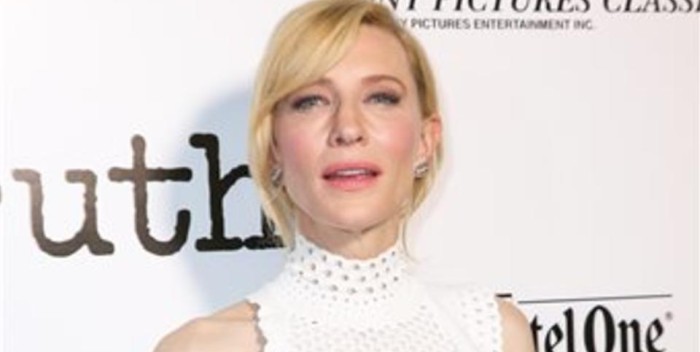 At the packed advance industry screening last night of “Truth,” Cate Blanchett descended the staircase of the Academy Theater in Beverly Hills in true Hollywood glamour style. The Academy is lush and wonderfully old Hollywood, so the sight of Cate, descending down the winding staircase adorned by life size golden Oscars, as the guests downstairs munched on mini hamburgers, all practically stopping to watch Cate, was truly a sight to behold.

Helped by her longtime noted fashion stylist, Elizabeth Stewart, Cate was a Hollywood heavenly vision in white. The two time Oscar winner is going to need Elizabeth’s expertise this coming awards season, as she is on the map for her bravo performance in “Truth,” as well as her talked about performance as a closeted lesbian in 1950’s New York in “Carol.”

Blanchett shines in “Truth” playing the real life veteran CBS News Producer Mary Mapes who, faced harsh, –and many say unjust– scrutiny, for a story about George W Bush’s controversial military record. The fiasco cost not only Mapes her TV career, and ended the nightly news anchor job for the respected Dan Rather (Robert Redford).

This whole saga fell under the radar for most people, including Blanchett, who is Australian. She told me: “This was a fantastic experience. I didn’t know the whole or the true story. I knew vaguely about what happened with Dan Rather, so I did research on it, again, because I didn’t know.”

Producer Brad Fischer said, “Mary is still out there, writing and pursuing what she’s passionate about. She hasn’t worked in television news since this whole thing unfolded. She’s an incredibly smart, witty and a great person. It was a tragic event for everybody involved. This story is more relevant today than it was back then, in terms of what the news has become. There is so much manipulation in stories and in the media by the time it gets to the viewer.”

Cate added that, “I’m so glad this story has been told, because it really needs to be known by the public, what really goes down behind the scenes that we’re not always aware of. So I think it’s a tremendous tribute to all the people that are involved in this film to tell this story. So that the truth came out, that the truth always wills out. You can only hope.”