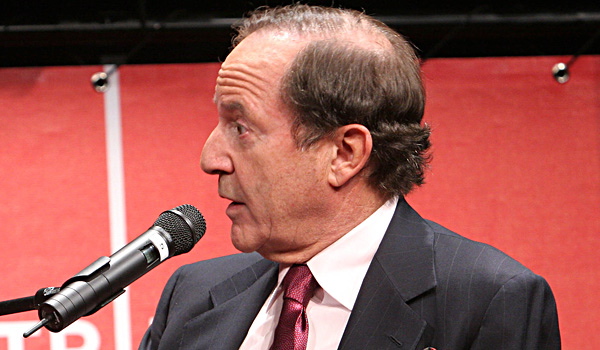 Where in the world is Mort Zuckerman? The publisher of the famed 96 year old New York Daily News has been MIA in public for some time now, a head scratcher to be sure. His newspaper is dissolving before our very eyes. Yet Mort– who loves the limelight– has vanished.

Zuckerman, 78, put the Daily News up for sale last February. He was last photographed in mid June at a New York book party. In July, the New York Post ran a story about Zuckerman turning over the sale of the News to his nephews. (Who even knew he had had nephews?) Zuckerman declined to comment. Always a hands on businessman, the Montreal born billionaire and real estate tycoon was suddenly delegating his legacy. Because real estate mogul is not what he wants to be remembered for– pundit, diplomat, publisher is the correct epitaph.

Zuckerman appeared weekly on “The Mclaughlin Group,” a syndicated Sunday political show, until July 31st. He hasn’t been on the show since then. In what seems like his final appearance, Zuckerman — oddly– makes a strong case for Texas governor Rick Perry’s presidential run.

Yes, Rick Perry, who ended his campaign six weeks later on September 11th. He wasn’t a serious candidate. He was barely in the race. The usually astute Zuckerman said on the air(*see video below): “But let me just say, the man whom I think is going to emerge and surprise everybody is Governor Perry of Texas. I was just witness to his performance and he was phenomenal. He was very knowledgeable, very forceful, had a great sense of humor. He is an underestimated candidate.”

The day after the McLaughlin Report aired, Zuckerman issued a statement that he would not be appearing at the East Hampton Artists-Writers softball game. It was the first time he missed the game since 1993.

Three weeks later he called off the sale of the Daily News after there were no takers. The News had been for sale all spring and summer. All through that time Zuckerman made no comment. A few days later, on August 26th, the News shocked the city by putting out its grisliest and most tasteless front page ever. The paper used photographs of the murder of Virginia TV reporter Alison Parker, plus used video of the shooting on its website. Twitter blew up with outrage. Zuckerman, a man of taste, would never have permitted such a thing in the past. Was he going downscale to capture the Post audience? Would that get him a sale?

Zuckerman, for all the hubbub, remained silent.

And then on September 11th, the same day Perry folded his campaign, an announcement from the News: editor in chief
Colin Myler was leaving, and returning to London. Myler– who’d been in the job for three years–an eternity at the News– and Zuckerman had been tight. But with the sale off, and layoffs coming, Myler was expendable. The memo came not just from Zuckerman but was co-signed by William D. Holiber, CEO of the company.

Silence and absence from Mort Zuckerman. A New York Times story a few days ago actually did quote Zuckerman about the Daily News’s shift to digital, although it’s unclear how the quote was issued. It was well crafted at any rate: “It’s a younger audience and that’s what advertisers want. If people don’t want horses and buggies anymore and they want to ride in automobiles, then you better damn well get into the auto business.”

That’s pretty much all that Mort Zuckerman has said as dozens of well known Daily News writers, reporters and editors have left the building. Mike Lupica is pretty much gone. David Hinckley, Jim Farber, Bill Madden, much of the sports section, gone. There is serious doubt that the News will continue to be a seven day paper as the feature, news, and sports sections have been gutted. Word is that the digital edition will aggregate news from other sites, leaving the famed Daily News an empty husk of what it once was.

And Mort? The man who dated Gloria Steinem, attended first nights in tuxedos, traveled the world to meet leaders and captains of industry?

PS Zuckerman’s byline has run in US News & World Report and the Wall Street Journal, as well. But I’m not counting those as appearance. Back in the day, Harold Evans used to write Mort’s editorial every week for US News. Authorship under the Zuckerman byline is fungible at best.