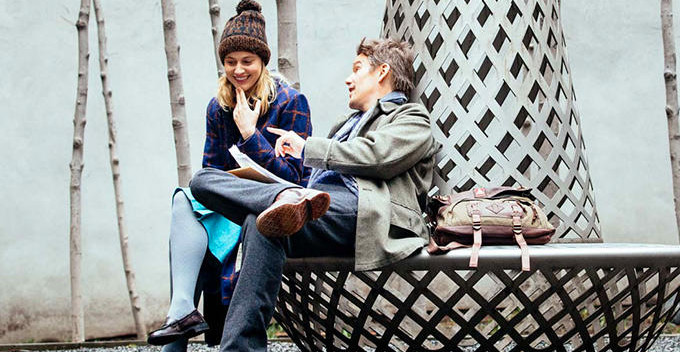 Listen closely when you’re watching Rebecca Miller’s wonderful new comedy, “Maggie’s Plan.” The film was just bought by Sony Pictures Classics, and hopefully will get a release this year. Julianne Moore would be a cinch for Best Supporting Actress, and Greta Gerwig is terrific. Ethan Hawke is even better than he was in “Boyhood.”

Does Wasserman even know she’s been named a character?

“Maggie’s Plan” is written and directed by Rebecca Miller based on a short story by Karen Rinaldi. Miller, of course, directed “Personal Velocity” and “The Ballad of Jack and Rose,” which starred husband Daniel Day Lewis. She’s the daughter of the late, great American playwright Arthur Miller. She’s hit her stride with this film, which was beloved in Toronto two weeks ago and played like gangbusters.

What you need to know: Greta Gerwig is Maggie, who planned on having a baby solo until meets John (Hawke). They have an affair that ends his marriage to Julianne Moore (hilarious with a German accent). Only, after she has the baby, Maggie realizes maybe John isn’t all he’s cracked up to be, and she wants to give him back. That’s her plan. Bill Hader and Maya Rudolph (whose husband Paul Thomas Anderson directed DDL to acclaim in “There Will Be Blood”). Rachael Horovitz is the producer who shepherded the film along to completion.

I don’t know what Sony’s plan is yet for “Maggie’s Plan” but I do hope they don’t wait too long. This is one smart comedy, up there with Nora Ephron or Nancy Meyers or Nicole Holofcener’s best work.

PS It probably won’t happen, but Julianne Moore could be up for Best Supporting in this film and lead actress in “Freeheld.” She’s that good in everything. But of course, she just won the Oscar in “Still Alice.”