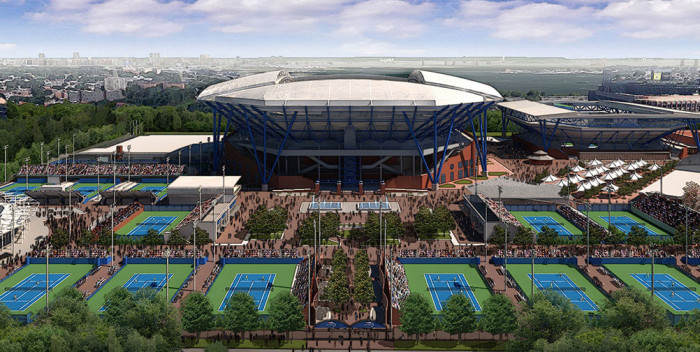 Serena? Federer? Djokovic? Think they’re the highest paid players in tennis? Guess what: the US Open, which just concluded, is far more interesting backstage that on the court. I can tell you, and I’m surprised, that Gordon Smith, the CEO of the US Tennis Association, took home $1.3 mil last year. The second highest ranking exec at the US Open, COO Daniel Zausner, got $828,700.

Total salaries for the USTA last year came to almost $7 million. That doesn’t include another $14 million to independent contractors.In 2013 they claimed $131 million in assets, un-taxed assets.

How do we know this? The USTA is a 501 c3, a non profit organization. They file a Form 990 Tax return. Like the NFL, they consider themselves a, ahem, charity.

You do realize the US Open is played just once a year. It lasts two weeks. What a racket! (Pun intended.) This is better than the Rock and Roll Hall of Fame.

The USTA’s 501c3 filing is totally separate, by the way, from another one for the USTA Foundation. Patrick McEnroe, John’s brother, is paid a whopping $940K out of the foundation’s non profit monies for “player development.”

At least they’re charitable. The USTA Foundation gave away roughly $1.6 million in 2013 to youth tennis and community groups. The USTA main 501 c3 benefits no one but their execs and the maintenance of the stadium in Flushing, Queens. The latter group had $63.5 million in expenses in 2013, and none of them were grants or donations.

The huge USTA salaries are commensurate with the actual players. Singles winners of the US Open receive $3.3 million apiece. The singles runners up get $1.6 million. Semi finalists winners get $805K. This means the execs are paid in the same ballpark, so to speak, without breaking a sweat.

Get this: the 64 players who won first rounds each received just $39,500 for their work. What shnooks! They should have gotten jobs in the front office!

The USTA has lots of expenses: $13 million in rent for the National Tennis Center out in Queens.(They pay it to themselves since the USTA owns Arthur Ashe Stadium, where tickets can run into the thousands of dollars to see matches.)  Legal fees of $720,000. Almost $1 million in travel expenses was paid for those highly remunerated execs.

Again, what a racket.