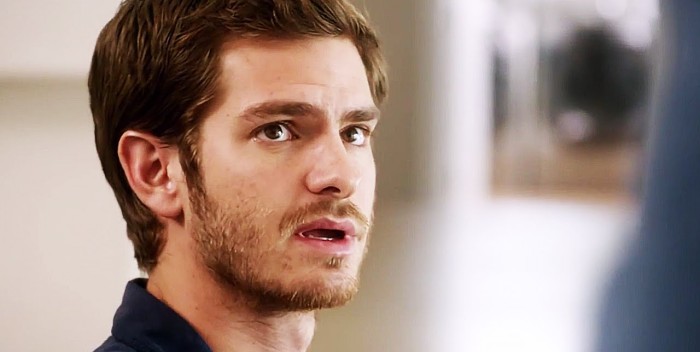 Andrew Garfield is by every definition, an intense, serious actor. At the age of 32, he brings all he has to every role he inhabits. He’s also a truly lovely guy. I caught up with him at the Broad Green Pictures pre-party, of his upcoming movie “99 Homes,” a gut wrenching film set in the 2008 housing market catastrophe. Peggy Siegal put together the party at the Landmark Theater in L.A. that brought out Catherine Harwicke, Jane Seymour, K Callan, Laura Harring and Clancy Brown, among others.

Andrew plays the decent, law abiding construction worker Dennis Nash, who despite all his noble efforts, can’t save his family home. What follows is thrilling drama, corruption and more, all dealing with this complex subject. Directed by Ramin Bahrani and written by Bahrani and Amir Naderi, “99 Homes,” could quickly become a classic of the American experience.

Laura Dern, of course is perfect as Andrew’s mother who had him when she was just a teenager. Laura’s own Mom, the legendary actress Diane Ladd, was there with her and met Andrew for the first time. She told me: “He is brilliant, and so is my daughter!” Michael Shannon plays Rick Carver, the nattily attired heartless real estate with laser like precision. This talented ensemble brings this story to life in a thrilling, Faustian and Shakespearean way.

I asked Andrew what drew him to the story.

“There was something so authentic about the script. The trueness of the story and the heartbreak of these people is universal. Those that are not being served by the economic system in America. No one is being served really. It was a visceral thing that hit me when I read it. I don’t know why, but I know that feeling of exile.”

Andrew is both an American (his father is American) and a British citizen. Is it different there?

He answered, “The British system is marginally different. It’s capitalism gone crazy. We just voted in a conservative government in the UK. It’s a vote for more separateness and disparateness, a lack of community. I’m going to keep what’s mine, it promotes scarcity. It’s depressing. Here, we are the richest country in the world, and yet people are starving here too. Being abandon-able and discardable, I think everyone identify with. And it’s being played out in such a heartless mass way across the country where people are literally being tossed out on the sidewalks.”

He continued, “What the Nazis did, as we all know, is identify who they perceived as those who were unworthy of living, who were subhuman. They were literally discarded from the earth in a very direct way. We are going to kill you because we don’t believe you’re furthering our human race. What is happening in this situation is an insidious, subliminal, version of the same. You are discardable, you are unworthy, you are not needed. The system is set up in way in that exclusion, that exile, that discarding of souls, which is happening but not being named or talked about.”

Lets lighten the mood Andrew. What’s next for you, a popcorn movie?

“Nope, still intense. I just finished a film, (“Silence,” directed by Martin Scorcese no less and co-starring Liam Neeson and Adam Driver) where I played a Jesuit priest (Father Rodrigues) in the 1600’s traveling to Japan where Christianity was outlawed at the time, trying to spread the gospel in a hidden way risking torture, capture and execution.”

He laughed, ”Sorry, but no. I’m about to do “Hacksaw Ridge,” (directed by Mel Gibson.) It’s a true story about the medic Desmond T. Doss who was the first conscientious objector, he wouldn’t pick up a gun, to be awarded a congressional medal of honor after WW2. The army tried to oust him, but he ended up saving half of his platoon.”

So I had to ask, what do you do for fun?

Andrew quipped, “I read about the mind of Adolf Hitler. Other than that, I surf and do some carpentry, but surfing is my main relief.”

Is he worried about sharks I asked?

“Please don’t put that in my mind. That’s all I need to worry about.”