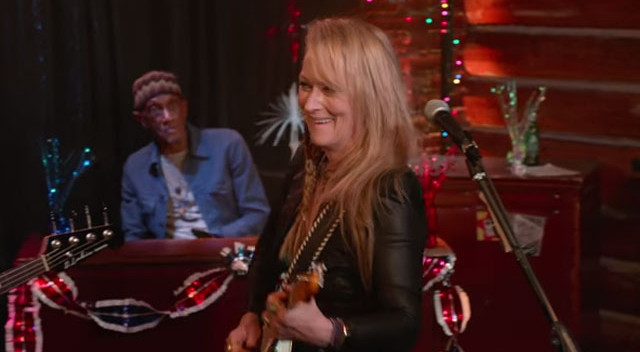 I hope that “Ricki and the Flash” isn’t the most misunderstood movie of the year. On the web, I’ve seen comments ranging all over the place largely because of the TV ads and the billboards. Jonathan Demme’s companion piece to “Rachel Getting Married” is not a broad comedy, or a musical comedy, or a mother-daughter weeper. It’s a really original dramedy about a woman stuck in time who didn’t want to be somewhere, so she left.

Ricki– her real name is Linda– had three kids with Pete (Kevin Kline) in Indianapolis. But she didn’t dig the domestic scene, and exited to do what she wanted– to be in a rock and roll band. We don’t get the whole back story but we pick up enough of it. She abandoned her family, has missed all birthdays and holidays, and was replaced by Pete’s second wife (Audra McDonald).

Ricki is not a rock star. She made one album and it kind of flopped. She lives in L.A. where she’s a cashier by day at a place like Whole Foods. At night she and her band, the Flash– featuring her sort of boyfriend played by Rick Springfield– play in a bar in Tarzana. They cover Tom Petty, Neil Young, and Bruce Springsteen. Sometimes they play a current hit, or a recent hit, if there are young people lurking about.

In “Rachel Getting Married,” directed by Demme and written by Jenny Lumet, Debra Winger played the mother who’d left the family and is now estranged. We never really get her story. Now Diablo Cody sort of picks up that thread and explores the idea of a runaway mom who wanted her own life.

What makes Ricki interesting: she is stuck in the 70s music wise, which makes sense. Also, fashion wise and she never changes her look– the braid, the blue eye make up, etc. She wears a bad leather motorcycle jacket. You do wonder how she and Kevin Kline ever came together in the first place but what’s nice is, he’s not judgmental after summoning her back to help their daughter (played by Streep’s real life kid, Mamie Gummer, with disarming sharpness).

This is a world class cast, with Kline, McDonald, Springfield and a neat turn by 89 year old Charlotte Rae, of “Different Strokes” TV fame and Broadway musical comedies of the 50s and 60s. Some of the story is formulaic by nature, but Demme doesn’t let that affect anyone. He keeps this superior group away from cliches.

Of course, in the end, it’s all about Meryl Streep. She’s sort of channeling Bonnie Raitt. All the music was recorded live, there’s no fakery. She’s a killer rock singer, and even plays some guitar. The tracks are eminently listenable. Ricki and the Flash are a great bar band, and that’s how they come off– unpolished, honest and fun. After all they’re led by Rick Springfield, famous for “Jessie’s Girl” and “General Hospital.” He’s the real deal.

It’s hard to write about Meryl anymore regarding awards– yes, she’ll get an Oscar nomination, who cares? It’s not about that. Think about more than that. She inhabits this character in a way that’s almost eery. Ricki is a loser mother, a feminist (who’s also a Republican, by the way), a bad wife, a competent musician who wants a life for herself while trying to explain her absence from the life she signed on to. Streep blows my mind because she finds this person and wears her like a motorcycle jacket. She knows every pocket, which zipper is broken, and where the cigarette burn happened. Extraordinary.

Just divest yourself of anything you thought about the ads or whatever, and go see “Ricki and the Flash” this weekend. It’s incredibly enjoyable.