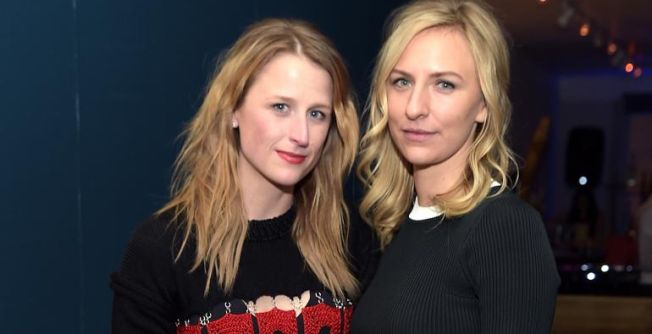 The sleeper hit of the summer could very well be “The End Of The Tour,” which tells the story of the five day interview between Rolling Stone reporter and novelist David Lipsky (Jesse Eisenberg) and acclaimed novelist David Foster Wallace, (Jason Segel.)  The interview took place right after the 1996 publication of Wallace’s groundbreaking epic novel, “Infinite Jest.”

Segel is a revelation; you’ve never him in this kind of layered, intense role.  Eisenberg, always good, plays his conflicted role with his usual laser focus intensity.

Jason Segel told me his thoughts, “It’s about the terrifying moment when everything goes as well as it possibly can and you still feel pain. Here’s a man who had a vocabulary to express things that we didn’t even know that we felt. “

I spoke with the director, Sundance vet James Ponsoldt at the recent LA premiere.  I asked him what he thought of the state of journalism today.  “When I was a teenager I wrote for a weekly in Georgia where I grew up, I interviewed bands and concerts.  Then I interned for Rolling Stone actually.  I respect great journalists and I rely on them to give articulation to the issues of the day.  In this case I was a huge David Foster Wallace fan.  I even had his works read at my wedding.  Donald Margulies, who adapted David Lipsky’s book, was my play writing professor in college.  So it was born out of my love of these writers.  Really though, at any given time people are not satisfied with the state of fiction, music, journalism, politics.  There are inspiring lights out there. People reading and writing intelligently and finding an audience is always inspiring to me.”

What’s next for him?  “I adapted a book called The Circle by Dave Eggers that I’m going to be directing. What can I say?  I get inspired by great writers.”

Two other standouts are second generation young actresses.  Mickey Sumner, who is Sting and Trudie Styler’s daughter, plays Wallace’s ex girlfriend, and Mamie Gummer, Meryl Streep and Don Gummer’s daughter, who plays a devoted fan turned friend. Mickey is already well known for her outstanding work in “Frances Ha.” Mamie, with dozens of credits, goes from “The Good Wife” to “Ricki and the Flash” this month.

I asked Mickey Sumner why she was drawn to the film. She said,  “It was a movie about David Foster Wallace whom I adored and loved.  I couldn’t believe I was asked to be involved.  I know that I’m not like everyone, I’m grateful for my uniqueness and quirkiness.  I just hope to keep finding those roles that I can bring what I am to them.  American, English, Australian, I’ll do anything.”

“The End Of The Tour” will be released on July 31st.