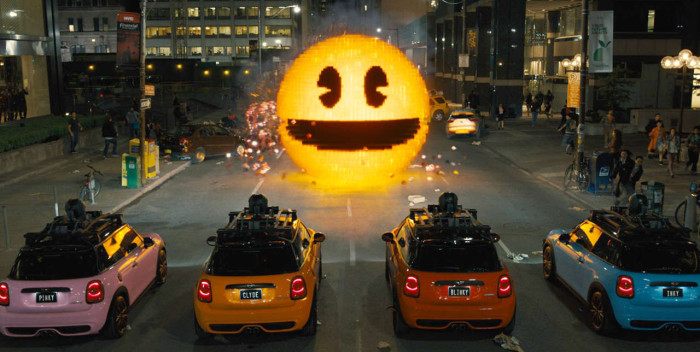 1:33PM WEDS: “Pixels” has 14 of 14 negative reviews including the major reviewers. Even if one or two pajama bloggers post something positive, the fate is sealed. Wipe out.

EARLIER “Pixels” is coming, but so far there are no reviews posted anywhere. Well, almost anywhere. The CGI semi animated film is being talked about on message boards as “the worst movie I’ve ever seen” by several who’ve seen it. My source from last week’s screening echoed that comment. So far there are no reviews on Rotten Tomatoes, even though both “Southpaw” and “Paper Towns” — the two big movies this weekend– are largely accounted for.

Sandler has mostly been in flops for the last five years. The sole exceptions are the interminable “Grown Ups” and its sequel. Otherwise, the list of disasters includes last year’s “The Cobbler” — which didn’t even post box office numbers– as well as “Blended” $46.2 million– and “Men, Women and Children” — $705K– yes thousand.

“That’s My Boy” and “Jack and Jill,” each made with a target audience of morons, were mostly DOA. To be fair the latter film squeaked out $74 million. It was likely profitable since its costs were minimal.

Sandler’s big run of $100 million movies was back in 2007-2008. Since then I guess much of his audience has been confined, restrained, or institutionalized. Maybe that’s why he’s headed to Netflix, so the homebound can see his work.

Keep refreshing as we monitor the “Pixels” reviews…