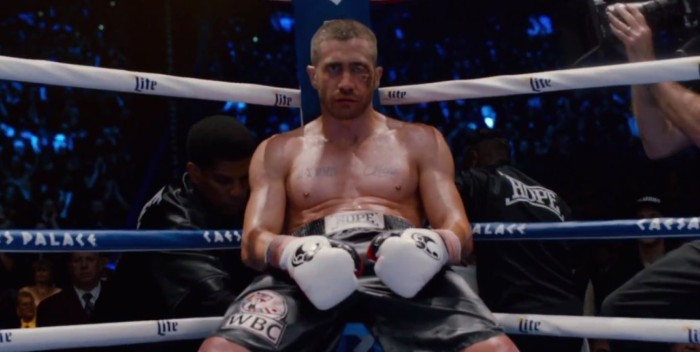 This probably couldn’t have happened ten years ago: Jay Z, Eminem, and 50 Cent all in one small movie theater sitting near each other. But that’s what did happen last night at AMC Lincoln Square for the star studded premiere of “Southpaw” starring Jake Gyllenhaal.

Also at the premiere were Jake’s sister Maggie Gyllenhaal and her actor husband Peter Sarsgaard. I also ran into Tony winner Alex Sharp from “The Curious Incident of the Dog in the Nighttime,” as well as Rosie Perez, “Girls” star Zosia Mamet, and actor boyfriend Evan Jongkeit.

Director Antoine Fuqua sent a video from the set of his new movie “The Magnificent Seven.” But Jake was there, along with Rachel McAdams. Naomie Harris, and child star Oona Laurence.

Also MIA was Forest Whitaker, who plays Jake’s boxing coach. “Southpaw” is about a left handed boxer named Billy Hope who’s down for the count in a big way but attempts a resurgence with Whitaker’s help. The performances are just wonderful, giving the movie a lot of heart and soul that overcomes some old cliches. Gyllenhaal and Whitaker will get awards buzz this fall in a big way.

Rosie Perez told me she does not feel gypped by “The View.” Even though she’s leaving the show after one season, she has not regrets. I am bitter for her, but that’s my problem!

I was also introduced to ultra- marathoner Scott Jurek and his beautiful wife Jenny by Sarsgaard. Over the weekend, Jurek completed a record breaking 46 day run of the Appalachian trail. And the Appalachians, living up to their reputation, rewarded him with tickets for public drinking, littering and hiking with an oversized group. You can’t make this up. Good grief.

Anyway, “Southpaw” has all marks of a hit and a big entertainment. It’s a little different for the Weinstein Company, something of a big studio movie for them. The film is dedicated to late composer James Horner, who died tragically last month piloting his private plane.

More on “Southpaw” later today. I couldn’t get downtown to the after party at Jay Z’s 40/40 club, but I do hope Jake was allowed to eat something other than a protein shake and a celery stalk.